Southwest Airlines inaugurated two international routes Saturday that brought new long-haul service for customers using two of the carrier's growing gateways, Baltimore-Washington International Thurgood Marshall Airport and William P. Hobby Airport in Houston. Each of the new routes is longer than 2,000 miles each-way and marks historic milestones for the carrier both by connecting Central America to the Southwest network of destinations and by offering its longest-ever nonstop scheduled service from any of Southwest's Texas Triangle of original cities of Dallas, San Antonio, and Houston.

Beginning Saturday, Southwest Airlines operates nonstop service between San Jose, Costa Rica, and Baltimore/Washington on a once daily basis, and Aruba and Houston seasonally, once every Saturday through Aug. 8.

At Houston's Hobby Airport, Southwest employees celebrated the first Aruba-bound morning departure. This is the first-ever international flying offered from Houston Hobby. This October, Southwest is scheduled to complete the construction of a $156 million international terminal project which will give Houstonians and Southwest customers from across the network access to more international destinations.

"This is just the beginning of a very big 2015 for our Houston employees and customers with an additional six destinations across three countries coming online at Hobby later this year,” said Teresa Laraba, Southwest's Senior Vice President of Customers.
at March 07, 2015 No comments: 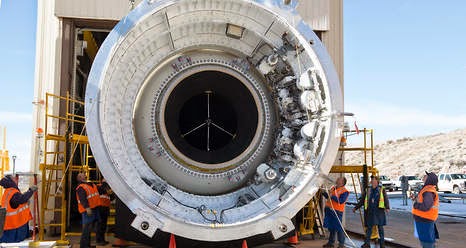 The largest, most powerful booster ever built for NASA's new rocket, the Space Launch System (SLS), will fire up for a ground test at 11:30 a.m. EDT March 11, at Orbital ATK Propulsion Systems' test facilities in Promontory, Utah.

The two-minute static test is a significant milestone for the SLS as part of NASA's journey to Mars, and follows years of development. It is one of two ground tests to qualify the booster for flight. A second test is planned for early 2016. Once qualification is complete, the hardware will be ready to help send the rocket, along with NASA's Orion spacecraft, on its first flight test.

When completed, two solid-rocket boosters and four RS-25 main engines will power the SLS as it begins its deep space missions. The boosters operate in parallel with the main engines for the first two minutes of flight, providing more than 75 percent of the thrust needed for the rocket to escape Earth's gravitational pull.

The first flight test of the SLS will feature a configuration for a 70-metric-ton (77-ton) lift capacity and carry an uncrewed Orion spacecraft beyond low-Earth orbit to test the performance of the integrated system. As the SLS is updated, it will provide an unprecedented lift capability of 130 metric tons (143 tons) to enable missions even farther into the solar system.
at March 05, 2015 No comments: 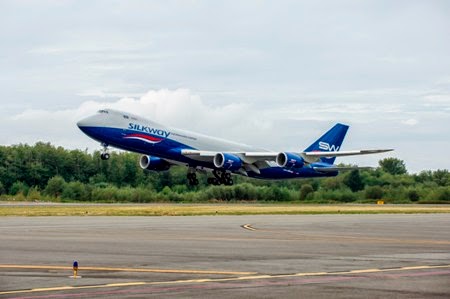 “Compared one on one, the 747-8 Freighter has no competitors,” Boeing said in a company press release. “The 747-8 Freighter provides cargo operators the lowest operating costs and best economics of any large freighter airplane while providing enhanced environmental performance.” The 747-8 Freighter offers 16 percent more revenue cargo volume than the 747-400, while keeping its iconic nose door.

Blue-Chip's Section 333 exemption authorizes UAS flight operations within five nautical miles of any airport or airfield inside Class E airspace with an approved COA, airport manager approval and issuance of a Notice to Airmen.

Blue-Chip's initial customer engagement is within the oil and gas exploration industry for Paragon Geophysical. Proof of concept test flights were successfully executed in November 2014 at the Nellis Air Force Base UAS test range in conjunction with Sensurion Aerospace, Paragon and the Nevada Institute for Autonomous Systems.
at March 03, 2015 No comments:

NASA's Dawn spacecraft has returned new images captured on approach to its historic orbit insertion at the dwarf planet Ceres. Dawn will be the first mission to successfully visit a dwarf planet when it enters orbit around Ceres on Friday.

Recent images show numerous craters and unusual bright spots that scientists believe tell how Ceres, the first object discovered in our solar system's asteroid belt, formed and whether its surface is changing. As the spacecraft spirals into closer and closer orbits around the dwarf planet, researchers will be looking for signs that these strange features are changing, which would suggest current geological activity.


"Data returned from Dawn could contribute significant breakthroughs in our understanding of how the solar system formed,” said Jim Green, director of NASA's Planetary Science Division at NASA Headquarters in Washington.

Dawn began its final approach phase toward Ceres in December. The spacecraft has taken several optical navigation images and made two rotation characterizations, allowing Ceres to be observed through its full nine-hour rotation. Since Jan. 25, Dawn has been delivering the highest-resolution images of Ceres ever captured.

Sicilian astronomer Father Giuseppe Piazzi spotted Ceres in 1801. As more such objects were found in the same region, they became known as asteroids, or minor planets. Ceres was initially classified as a planet and later called an asteroid. In recognition of its planet-like qualities, Ceres was designated a dwarf planet in 2006, along with Pluto and Eris.

Launched in September 2007, Dawn explored the giant asteroid Vesta for 14 months in 2011 and 2012, capturing detailed images and data about that body. Both Vesta and Ceres orbit the sun between Mars and Jupiter, in the main asteroid belt.

Ceres and Vesta have several important differences. Ceres is the most massive body in the asteroid belt, with an average diameter of 590 miles (950 kilometers). Ceres' surface covers about 38 percent of the area of the continental United States. Vesta has an average diameter of 326 miles (525 kilometers), and is the second most massive body in the belt. The asteroid formed earlier than Ceres and is a very dry body. Ceres, in contrast, is estimated to be 25 percent water by mass. 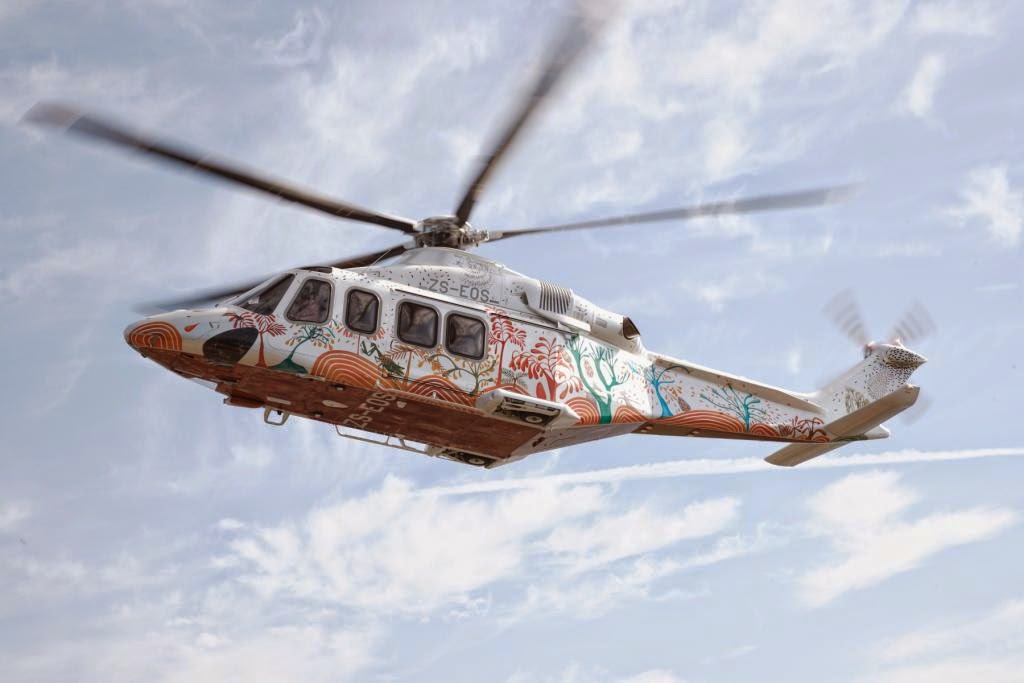 In its 17th annual Turbine-Powered Civil Helicopter Purchasing Outlook, Honeywell Aerospace expects that 4,750-5,250 civilian-use helicopters will be delivered during 2015-2019. The 2015 outlook presents a snapshot of the helicopter business at a point in time and reflects the current business and political environment.

The forecast estimates the five-year share of demand from the U.S. and Canada at 34 percent, up nearly eight points on stronger North American buying plans. When combined with Latin America, the Western Hemisphere represents 53 percent of the five-year global demand. Europe's share tallies 24 percent, with the Asia-Oceania region accounting for 14 percent, and Africa and the Middle East contributing nine percent.

Operators who intend to purchase a helicopter within the next five years noted that the age of their current aircraft (which includes factors such as maintenance costs, performance erosion and safety concerns), contracted replacement cycle and warranty expiration were all key reasons for their decision.

Operator preferences by class of helicopter
Satisfaction with aircraft

Again in this year's survey, Honeywell asked all respondents to indicate their current satisfaction over the past year with each model of aircraft they operate. For models that received more than 25 responses, the make and models with the highest net scores are the AW139, Robinson R66, Bell 407, Bell 429, Bell 412, Bell 206L, EC135, EC145, AS350B series and Sikorsky S-76C.

These top platforms account for over 70 percent of all survey make and model mentions and can be considered the top current production helicopters in terms of recent customer satisfaction attitudes and likelihood to promote.

Helicopter use expected to increase

As a side note, the U.S. Transportation Command is currently seeking a contractor that may be able to provide four heavy rotary wing aircraft capable of flying 150 hours per aircraft per month (1,800 hours per year).
at March 01, 2015 No comments:

1.) Lufthansa to demonstrate pilot-controlled taxiing system without engines running - TaxiBot, a semi-robotic pilot-controlled vehicle, transports airline aircraft from terminal gates to the runway and back, without using the airplane's own engines. [Full story]

3.) NTSB releases report on fatal Boeing 747 crash in Afghanistan - The National Transportation Safety Board (NTSB) released their first public factual report for the ongoing investigation into the April 29, 2013 crash of a National Airlines Boeing 747 at Bagram Air Base, Afghanistan. [Full story]

5.) FBI begins market research to replace 'alert aircraft' - The FBI Mission Support Contracts Unit, in support of the Critical Incident Response Group, is seeking information about leasing, purchasing, or leasing to own, an alert aircraft, according to contract documents released in February. [Full story]
at March 01, 2015 1 comment: