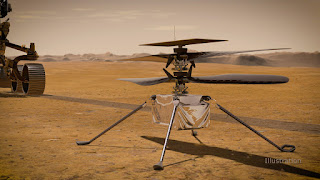 NASA is targeting no earlier than April 8 for the Ingenuity Mars Helicopter to make the first attempt at powered, controlled flight of an aircraft on another planet. Before the 4-pound (1.8-kilogram) rotorcraft can attempt its first flight both it and its team must meet a series of daunting milestones.

Ingenuity remains attached to the belly of NASA's Perseverance rover, which touched down on Mars Feb. 18. The rover currently is in transit to the "airfield" where Ingenuity will attempt to fly. Once deployed, Ingenuity will have 30 Martian days (31 Earth days) to conduct its test flight.

Flying in a controlled manner on Mars is far more difficult than flying on Earth. The Red Planet has significant gravity (about one-third that of Earth's) but its atmosphere is just 1% as dense as Earth's at the surface. During Martian daytime, the planet's surface receives only about half the amount of solar energy that reaches Earth during its daytime, and nighttime temperatures can drop as low as minus 130 degrees Fahrenheit (minus 90 degrees Celsius), which can freeze and crack unprotected electrical components.

"While getting deployed to the surface will be a big challenge, surviving that first night on Mars alone, without the rover protecting it and keeping it powered, will be an even bigger one,” said Bob Balaram, Mars Helicopter chief engineer at Jet Propulsion Laboratory (JPL).

"Ingenuity is an experimental engineering flight test – we want to see if we can fly at Mars," said MiMi Aung, project manager for Ingenuity Mars Helicopter at JPL. "There are no science instruments onboard and no goals to obtain scientific information.”

Ingenuity will run its rotors to 2,537 revolutions per minute and, if all final self-checks look good, lift off.  After climbing at a rate of about three feet per second (one meter per second), the helicopter will hover at 10 feet (three meters) above the surface for up to 30 seconds. Then, the Mars Helicopter will descend and touch back down on the Martian surface. Once the first few flights are complete the mission control team will develop a plan on how to move forward with Ingenuity.

At NASA Headquarters, Dave Lavery is the program executive for the Ingenuity Mars Helicopter. At JPL, MiMi Aung is the project manager and J. (Bob) Balaram is chief engineer.

The U.S. Space Force's 18th Space Control Squadron (18 SPCS) has confirmed the breakup of China's Yunhai 1-02 satellite in Earth orbit. The breakup occurred on March 18 at 03:41 a.m. EDT, the military said in a post on Twitter. The 18th SPCS is tracking 21 pieces from the breakup - "analysis is ongoing."

Yunhai-1 is a series of Chinese meteorological satellites. The satellites are built by Shanghai Academy of Spaceflight Technology and used for observation of atmospheric, marine and space environment, disaster prevention and mitigation, and scientific experiments. Yunhai 1-02 was launched in 2019.

The Yunhai 1-02 event follows the breakup of NOAA 17 that just occurred on March 10. NOAA 17 is a U.S. weather satellite.

Aside from the state-run lottery, there are four different forms of gambling currently allowed under Virginia law: casino gaming and sports betting; horse racing and historical horse racing; skill gaming; and charitable gaming.

See the DCNewsroom's Virginia Gambling Guide for a look into the commonwealth's gambling future.