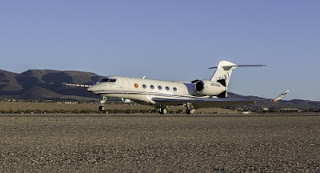 
The G500 flew from Savannah/Hilton Head International Airport into 75-knot headwinds and arrived at Henderson Executive 4 hours and 36 minutes later, accomplishing the 1,630-nautical-mile flight at an average speed of Mach 0.85 and altitude of 45,000 feet. Gulfstream test pilots Scott Martin and Scott Evans were at the controls, with Flight Test engineers Paul Ludlow and Nathaniel Rutland providing on-board support.

The G500 flew to Las Vegas with a significant amount of flight testing equipment on board:
The first G500 test aircraft, T1, is focused on flight performance and controls and has achieved a number of flight-test milestones since its first flight on May 18. The aircraft has flown more than 160 hours, completed 44 flights and reached an altitude exceeding 50,000 ft. Its longest flight was 5 hours and 22 minutes. T1 has reached a top speed of Mach 0.995. Flutter and envelope expansion testing are in progress, and initial testing of the aircraft's handling qualities and the high-speed and recovery stall system have also taken place.

In total, the G500 flight-test program consists of five aircraft, including a fully outfitted production aircraft that allows the company to test all the interior elements and complete integration of the aircraft systems with the passenger experience. T2 and T3 have been delivered to the Flight Test facility and are preparing for first flight. 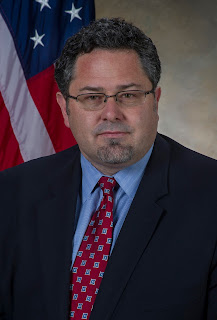 NASA has named Todd May acting director of NASA's Marshall Space Flight Center in Huntsville, Ala., as the agency continues the process of looking for a permanent director.


Patrick Scheuermann, who served as the Marshall director since September 2012, is retiring from the agency, effective Friday. His retirement caps a 27-year career with NASA that began in 1988 as a propulsion test engineer at the agency's Stennis Space Center near Bay St. Louis, Miss.

May was appointed Marshall deputy director in August, and previously served as manager of the Space Launch System (SLS) Program since August 2011. May led the SLS Program through a series of milestones, including engine tests and a successful, in-depth critical design review. SLS, now under development, will be the most powerful rocket ever built, able to carry astronauts in NASA's Orion spacecraft on deep space missions, including to an asteroid and ultimately on a journey to Mars.

May's NASA career began in 1991, working in the Materials and Processes Laboratory at Marshall. He was deputy program manager of the Russian Integration Office in the International Space Station Program at NASA's Johnson Space Center in Houston in 1994, and worked on the team at Marshall that developed and launched the Gravity Probe B mission to test Einstein's Theory of Relativity in 2004. That same year he assumed management of the Discovery and New Frontiers Programs, created to explore the solar system with frequent unmanned spacecraft missions.

May moved to NASA Headquarters in Washington in 2007 as a deputy associate administrator in the Science Mission Directorate. Returning to Marshall in June 2008, May was named Marshall's associate director, Technical, a post he held until being named SLS program manager.

The SLS Program is managed at Marshall, one of NASA's largest field installations, with almost 6,000 civil service and contractor employees, an annual budget of approximately $2.5 billion and a broad spectrum of science and technological missions.
at November 13, 2015 No comments: