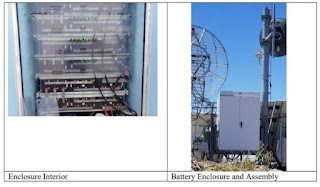 The battery bank that supplies power to the Customs and Border Protection (CBP) owned Tactical Communication site at Mohawk Mountain in Mohawk, Ariz., is beginning to show signs of failure. To avoid a complete site failure, CBP’s Office of Information Technology along with other agencies working with CBP are planning to replace the solar equipment.

Mohawk Mountain is in a remote location that requires helicopter transport for access by personnel and delivery of all materials, supplies, tools and equipment. Given the nature of the allowable work space and approved location for installations, the site has no additional staging area to support concurrent delivery of removals and installations. All deliveries are anticipated to be completed by single point lifts using a single hook up and single set down as no release or drop lifts are anticipated.

CBP is looking for a contractor to supply a helicopter to lift tools, equipment, and personnel up to the remote site that is located at Mohawk Mountain (Latitude 32.5900, Longitude - 113.6479). All lifts will be from a predetermined staging area or forward operating base (FOB) that will be used as the meet up location for transportation to and from the remote site and as the hook up location for all loads. The FOB is anticipated to be located at the following location: Marker Beacon 35 (Latitude: 32.605222, Longitude: ---113.773417). The FOB is accessed via a dirt road from Interstate 8. The contractor’s fuel truck is expected to park daily at FOB for refueling. Should the FOB change, it is anticipated that the location will not vary more than five miles away from the predetermined location. Local air restrictions may apply and will be the responsibility of the contractor to become familiar with local air restrictions and potential no fly zones/times. The contractor should note the site is mountainous where topography and winds can be highly variable an may impact approach vectors.

CBP will coordinate pre-clearance through the Barry M. Goldwater Range restricted airspace R-2301 and will inform contractor of any special transit procedures.

Multiple airlifts, of different payloads, will be required throughout the duration of the project to transport removals and installations to the remote site. The anticipated flight schedule is presumed to be four personnel flights (i.e. two in and two out) plus three to five flights for tools and equipment per day during Site Prep Activities and Site Clean Up activities. 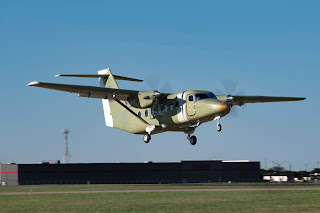 The Cessna SkyCourier turboprop development program has achieved another significant milestone as the third and final flight test aircraft (P2) successfully completed its first flight on Monday. This maiden flight for the high-wing, large utility aircraft comes on the heels of the second test article (P1) completing its initial flight in August. The P2 aircraft is the second airframe configured in the passenger variant, and it will join two other aircraft in the flight test certification program, which to date have already accumulated 150 flight hours.

The Cessna SkyCourier aircraft is designed and manufactured by Textron Aviation Inc.

The first flight of P2, piloted by Todd Dafton and Caleb Quick, lasted 90 minutes, reaching a speed of 210 knots true airspeed (ktas) and an altitude of 15,000 feet. The aircraft will primarily be used to focus on avionics testing, flammable fluids testing, and the cold and hot weather testing in the climatic chamber at Eglin Air Force Base in Florida.

“We will soon be starting line production in Wichita as we move closer to getting the Cessna SkyCourier into the hands of our customers,” said Chris Hearne, senior vice president, Engineering & Programs.

The P2 and prototype aircraft both have the passenger configuration, including windows and escape hatches, while the P1 aircraft is configured in the freighter configuration.

The Cessna SkyCourier aircraft will be offered in various configurations including a 6,000-pound payload capable freighter and a 19-seat passenger version. 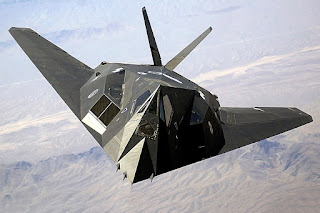 On Oct. 3, a Stealth Fighter F-117 arrives at Palm Springs Air Museum, where it will be welcomed into the permanent collection. The museum is organizing a Stealth Fighter F-117 Exclusive Arrival Party to welcome the aircraft. Limited availability tickets are $117 each that includes boxed appetizers, beverage, meet and greet with a F-117 pilot, and commemorative t-shirts. The F-117 will be welcomed with a formal military retirement ceremony, including water arch. This will be the only chance to see this aircraft for many months. It goes into restoration and will not be seen for at least a year.

The Palm Springs Air Museum contains over 60 vintage aircraft from World War II, the Korean War, and the Vietnam War contained in 86,000 square feet of open hangars and on the tarmac.