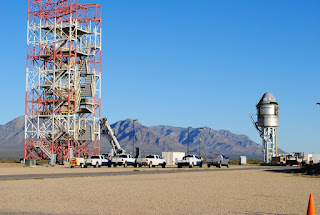 NASA and Boeing will test a pad abort system on the CST-100 Starliner spacecraft on Monday from Launch Complex 32 at White Sands Missile Range in New Mexico.

Boeing's Pad Abort Test is part of NASA's Commercial Crew Program. The goal of the program is to provide safe, reliable and cost-effective transportation to and from the International Space Station.

The test on Monday is designed to verify that each of Starliner's systems will function not only separately, but in concert, to protect astronauts by carrying them safely away from the launch pad in the unlikely event of an emergency prior to liftoff. During the test, Starliner's four launch abort engines and several orbital maneuvering and altitude control thrusters will fire, pushing the spacecraft approximately one mile high and one mile north of the test stand.

The spacecraft's crew module will use parachutes with landing airbags to touch down at White Sands Missile Range. It will be recovered and brought back to Launch Complex 32 for evaluation and analysis.