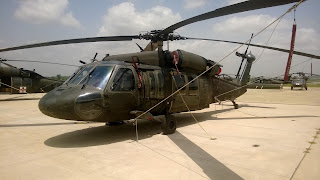 The U.S. Army Contracting Command-Redstone announced Friday they are putting another UH-60A helicopter up for sale on behalf of The Utility Helicopters Project Management Office, Black Hawk Exchange and Sales Team (BEST) Program.

Interested buyers have 15 days to indicate their desire to purchase the aircraft and arrange satisfactory arrangements for payment, pickup, handling, and transportation charges. Payment must be made within 30 calendar days after purchase.

The UH-60A Black Hawk (tail number 80-23506) is located at the BEST Aircraft Consolidation Facility in Huntsville, Ala.

Human rights group calls for a boycott of Qatar Airways

On March 16, Qatar Airways, an airline owned by the State of Qatar, an oil-rich country in the Persian Gulf, begins daily service from Boston's Logan Airport to Doha, Qatar.

The expansion of the State of Qatar's commercial enterprises, including state-owned Qatar Airways, reflects the smoke and mirror tactics used by the Qatari government to hide the inhumane treatment of its most vulnerable workers, according to the Alliance for Workers Against Repression Everywhere (AWARE). “The de facto marketing arm of the state, Qatar Airways, is expanding rapidly across the globe and touts itself as 'luxurious' and 'world-class,' while at the same time masking egregious human rights abuses being committed within the country,” AWARE said in a press release Tuesday.

AWARE will be leading an international campaign using the hashtag, #boycottQatar, as Qatar Airways launches this new service. The group is a nonprofit organization working to bring international attention to policies and business tactics that harm workers' rights.

"Qatar Airways has, itself, abused its employees who work under the careful watch of the Qatari government,” AWARE said. “In Doha, the airline mandates that its employees live in company housing with strict curfews and where their personal lives are monitored, and bans workers from marrying without its permission. Female employees who become pregnant can be terminated. Women also must adhere to strict grooming policies, including weight limits. It is imperative the local Massachusetts government and citizens of Boston are made aware of Qatar and Qatar Airways' litany of abuses against workers.”
at March 08, 2016 No comments:

Nolinor Aviation announced Tuesday that the company is adding a Boeing 737-300 aircraft to its current fleet of 737-200s beginning this spring. Based at Mirabel in Québec since 2005, Nolinor thus becomes one of the few carriers in the East to own an aircraft of this type.

With the 737-300, Nolinor can fly bigger payloads non-stop to more distant destinations. Mexico City, for example, could be reached from Montreal in just 5½ hours.

Operating with the registration C-GNLQ, Nolinor's 737-300 is powered by CFM International's CFM56 high-bypass turbofan engines, which consume less fuel and comply with the International Civil Aviation Organization's stricter Chapter 3 noise limits. Its maximum cruising speed is 491 knots, with a long-range cruising speed of 429 knots. Range with a normal payload and full tanks is 4,973 kilometers (2,685 nautical miles).

Founded in 1992, Nolinor Aviation is an air transportation company specializing in commercial charter flights. Nolinor offers air services across Canada and the United States. The company employs a workforce of 185.
at March 08, 2016 No comments:

In the aftermath of an investigation conducted at Sea-Tac International Airport, the Washington Department of Labor and Industries issued citations recently to Alaska Airlines and its ground-handling contractor, Menzies Aviation, for health and safety violations.

Inspectors found "Alaska Airlines did not provide safety devices, safeguards, work practices, processes and the means to make the workplace safe from hazards that were causing, or likely to cause, serious physical harm to Menzies ramp agent employees who handle cargo and passenger baggage for Alaska Airlines at SeaTac Airport."

Menzies was fined $62,000 for 16 violations of state workplace health and safety laws."The vehicles and other equipment we use are often poorly maintained and it has led to injuries. This should not be happening anywhere, much less on public property," said Socrates Bravo, a ramp agent who has worked for Menzies Aviation for more than four years.

Menzies employees filed a complaint with the state's Division of Occupational Safety and Health last summer alleging unsafe vehicles and other ground service equipment "with malfunctioning or deficient engines, brakes, gears, steering, electrical systems and tires, and other safety violations." The workers requested a fleetwide review of all ground service equipment used in the company's operations at Sea-Tac.

"Given the critical nature of the service that we provide, it is unacceptable that we have to deal with brake failures, dangerously worn tires, stalling engines and other unsafe conditions,” said Darius Harris who handles baggage for Menzies.

"The commissioners need to be mindful of the fact that last year a jury assessed $10 million judgment against the Port in a case filed by a contract worker tragically paralyzed in a ramp accident at Sea-Tac,” said Sergio Salinas, president of Seattle-based SEIU Local 6.

Alaska is the dominant carrier at Sea-Tac; together with Alaska Air's regional carrier Horizon Air, Alaska Air handles just over 50 percent of passengers at the airport.

Alaska Airlines made headlines across the country in April 2015 when one of its flights was forced to make an emergency landing at the Seattle-Tacoma International Airport after passengers heard banging and screams from a ramp agent who was trapped in the plane's cargo hold. Alaska reported the ramp worker, who was not injured, told officials he had fallen asleep in the cargo hold and did not wake up until after takeoff.

Menzies' safety record came under intense scrutiny following a fatal accident at Los Angeles International Airport last year that resulted in the death of Menzies ramp worker Cesar Valenzuela when he was thrown from his tug and pinned under one of the tug's tires. The vehicle did not have seat belts.
at March 07, 2016 4 comments: