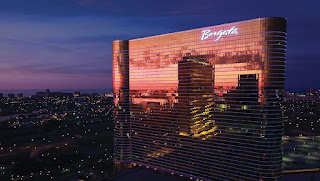 Borgata Hotel Casino & Spa, Atlantic City, is going to be fully integrated as an MGM Resorts International property in April. The work will allow for:

“To implement these exciting changes, and prepare us for new promotions and events, we will pause promotional offers from April 17–30,” said Melonie Johnson, president and COO of Borgata, in an email to members. There will be limited disruption on the casino floor during this time. For any inconvenience this may cause, Borgata has added $40 Bonus SLOT DOLLARS to members M life Rewards account valid from April 1 – April 16.

“This will be in addition to the rest of your promotions. Rest assured, you will still be able to earn and redeem SLOT DOLLARS and Express Comps during this time,” Johnson said. “We are excited to resume promotional offers starting in May.”

In the latter half of 2013, New Jersey became the first U.S. state to legally permit online casinos. Rush Street Interactive, Inc. (RSI) entered the New Jersey online casino market approximately three years after that market opened and there were already numerous competitors in the market at that time. Less than three years after beginning operations in New Jersey, RSI was ranked the #4 online casino brand in New Jersey based on revenue, out of 19 total operators in the market at that time, according to the Eilers & Krejcik Gaming (EKG) United States Online Casino Tracker for April 2019.

Today, Chicago-based RSI is a leading online gaming and entertainment company that focuses primarily on online casino and online sports betting in the U.S. and Latin American markets.

RSI provides customers an array of leading gaming offerings such as real-money online casino, online sports betting, and retail sports betting, as well as social gaming, which involves free-to-play games that use virtual credits that can be earned or purchased. The company launched their first social gaming website in 2015 and began accepting real-money bets in the United States in 2016. The company currently operates online casino and/or online sports betting in eight states (Colorado, Illinois, Indiana, Iowa, Michigan, New Jersey, Pennsylvania and Virginia). RSI's Betrivers.com website and phone app went live in Virginia on Jan. 27, 2021. In addition, the company has secured potential market access to New York, Ohio, Maryland, Missouri and if certain conditions are met, Texas.

RSI has been operating online gaming in Colombia since 2018, a country with a population of approximately 50 million. Online gaming is also authorized in Mexico and Brazil, which have populations of approximately 128.9 million and 212.6 million, respectively. The highest populated country in Latin America, Brazil, legalized sports betting in December 2018.

Real-money online casino and online sports betting offerings are provided under BetRivers.com and PlaySugarHouse.com brands in the United States and under RushBet.co in Colombia.

Experienced gaming operators Neil Bluhm, Greg Carlin and Richard Schwartz founded Rush Street Interactive, LP (“RSILP”), which is now an indirect subsidiary of RSI. Company founders had invested approximately $50 million into RSILP. This capital was primarily used to fund the development of our proprietary online gaming platform and offerings, recruit and grow an experienced team, and expand into new geographic and product markets.

As of March 22, 2021, RSI had a global workforce of approximately 264 employees and contractors, with approximately 37% of people working in technical roles. Approximately 50% of their people are based in the United States with the remaining 50% being based elsewhere in the world, including Canada, Colombia, Estonia and Mexico.