Clinical psychologist and author Liz Dale is asking anyone who has had a near-death experience (NDE) to participate in an online survey regarding the experience and its consequences – especially those in the lesbian, gay, bisexual, and transgender (LGBT) community. Survey results will inform a groundbreaking study and a new book to be published by Balboa Press, a division of Hay House. The survey is live now at http://lizdale.com/survey.html.

Dale's official site (http://lizdale.com/) has become an important resource for those with academic or personal interests in the NDE phenomenon. It includes access to over 1,300 books about NDEs. Dale anticipates that her new survey will make important contributions to the literature, as well as pave the way for future investigations.

Survey respondents can remain anonymous if they wish. Likewise, Dale asks that anyone who submits stories only use their first names and avoid sharing confidential personal information. Examples of questions from the survey include:
The forthcoming book on NDE aftereffects will not be Dale's first; in 2000, she published "Crossing Over and Coming Home: Twenty-One Authors Discuss the Gay NDE as Spiritual Transformation." The following excerpt from the book captures the essence of this research and the intensely personal and profound nature of the stories people have shared with her: "And then I felt the presence of Jesus Christ all around me. And I asked him, 'Do I really have to go back?' Then Christ said that he would send me guardian angels to aid me in my healing, and to guide and protect me. I awakened to find two men kneeling over me, with expressions of apprehension and concern on both their faces. For some reason I felt that they might be gay men. I felt very strongly that both men symbolized what would prove to be a succession of 'angels' that Christ had promised to send me."
at January 05, 2017 No comments: The global anti-drone market is anticipated to be worth $1.85 billion by 2024, according to a new report by Grand View Research, Inc. The increasing use of drones has resulted in the commencement of another market that focuses on a solution for rogue unmanned aerial vehicles (UAV), complete with net-firing bazookas, electromagnetic shields, and anti-drone death rays.

The steep rise in the adoption of drones for commercial as well as recreational purposes has increased concerns regarding aerial attacks and threats. Detection and identification of these unmanned aircraft systems have become a vital factor for the maintenance of the security. Various institutions across the world are increasingly deploying counter drone measures to address the ever-growing need for safety and security.

As UAVs become deadlier, stealthier, faster, agile, smaller, sleeker, and cheaper, the nuisance and threats posed by them are expected to grow at numerous levels, ranging from personal/domestic privacy to national security. With that in mind, there is significant effort both in terms of money and technology being invested in the development of anti-drone technologies.

Various national security agencies across the world have started to precisely understand the potential threats from drones and increasingly considering commercial as well as consumer drones as the new major threat to the world. It is only a matter of time before redundant and reliable methods of countering drones become mainstream and widely available.

Several busy airports and hubs across the world are seeking defense measures and regulations to protect their airliners and harbored aircraft from drones straying into commercial airspace and posing innumerable threats of a collision.

AT&T and NASA are researching the development of an Unmanned Aircraft System Traffic Management solution that would support the safe and highly secure operation of drones in the national airspace. A key element AT&T and NASA are researching is the potential impact of cybersecurity threats. The vast availability of drones -- and their many current and potential uses -- could increase their risk of cyberattacks. AT&T advocates cybersecurity protections designed into the system from the outset.

Further key findings from the report suggest:
at January 04, 2017 No comments: 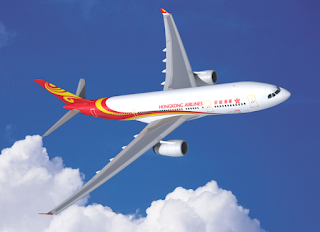 Commencing on June 30, Hong Kong Airlines will operate daily direct flights between Hong Kong and Vancouver by Airbus A330 aircraft.

Established in 2006, Hong Kong Airlines has grown remarkably in just ten years with a wide destination network covering 36 major cities across the Asia Pacific region, including Gold Coast, Auckland, Beijing, Shanghai, Taipei, Tokyo, Sapporo, Seoul, Bangkok, Bali and Okinawa. The current operating fleet is made up of 34 Airbus aircraft, consisting of 29 passenger aircraft and five freighters.
at January 04, 2017 No comments: