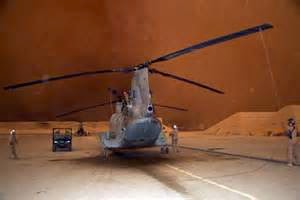 The U.S. Transportation Command (USTRANSCOM), Specialized Transportation Branch, is seeking sources that may be able to provide four heavy rotary wing aircraft capable of flying 150 hours per aircraft per month. The government anticipates the size of aircraft needed to support movement to be a minimum of 12 passengers and cargo for a minimum internal load of 5,000 pounds. The government anticipates the contractor positioning the aircraft at the Baghdad Diplomatic Support Center in Iraq to transport passengers and cargo. “Missions may involve destinations throughout Iraq. Other destinations may be added on a mission-by-mission basis,” USTRANSCOM said in contract documents released Friday.

Cargo will primarily consist of food and water, general supplies, fuel, construction materials, ammunition-all caliber, medical supplies, repair parts and non-military goods such as humanitarian assistance items. “Other cargo may be loaded if there is space available,” USTRANSCOM said. All aircraft shall be equipped with an operational cargo hook. The cargo will be configured by the government for loading inside the cabin of the aircraft or prepared for slingload delivery. All rotary-wing aircraft shall be equipped with a Ballistic Protection System.

At this time, USTRANSCOM is not looking for proposals. Contractors interested in supporting the transportation service are invited to contact USTRANSCOM by March10.
at February 28, 2015 No comments:

The first all-electric satellite for Europe's Eutelsat communications company is scheduled for launch aboard a Falcon 9 rocket Sunday at 10:50 p.m. EST. The Falcon 9 rocket is provided by Space Exploration Technologies Corp., also known as SpaceX.

Built by U.S.-based Boeing Defense and Space, the new Eutelsat 115 West B satellite arrived in Cape Canaveral, Fla., on Jan 25.

Equipped with 12 C-band and 34 Ku-band transponders connected to four service areas, Eutelsat 115 West B will extend reach of the Americas to markets in Alaska and Canada, replacing the Eutelsat 115 West A satellite that operates in an inclined orbit at 114.9 degrees West. The new satellite will focus in particular on serving clients providing data services, including broadband access, cellular backhaul, VSAT solutions and social connectivity. 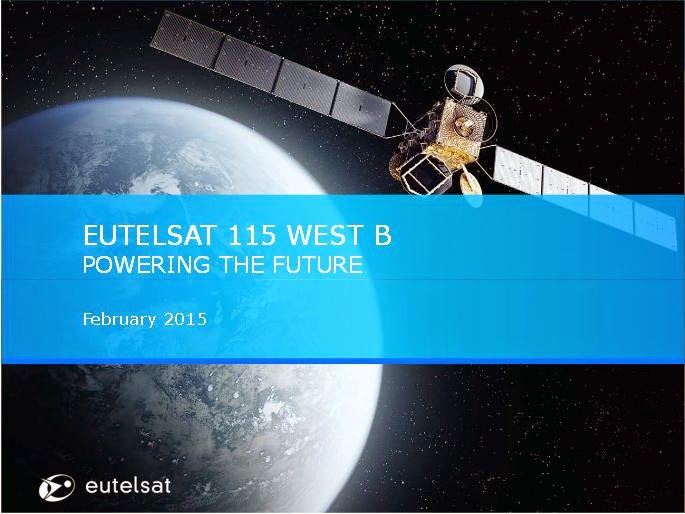 The U.S. Forest Service Fire and Aviation Management office is conducting market research, for planning purposes only, regarding interested vendors/contractors who are capable of providing one new manufactured, multi-engine, turboprop aircraft with a payload of at least 34,000 pounds for purchase. The U.S. Forest Service (USFS) announced the potential aircraft purchase in contract documents released Thursday.

“This aircraft will be used as a multi-mission firefighting aircraft; missions include firefighting airtanker, cargo, and personnel transport,” the Forest Service said in contract documents.

The Federal Consolidated and Further Continuing Appropriations Act, 2015 stated that funding shall be available for the purpose of acquiring aircraft for the next-generation airtanker fleet to enhance firefighting mobility, effectiveness, efficiency, and safety. The Forest Service intends to purchase an aircraft to fulfill this congressional appropriation.

Generic Requirements:
• One new manufactured aircraft.
• Type Certificated in 14 CFR Part 25 Transport Category by the Federal Aviation Administration.
• 14 CFR 25.571 Damage Tolerance and Fatigue Evaluation at Amendment 45 or higher, or equivalent for the mission usages it is certificated for.
• Equipped with multiple turbo-prop engines.
• Meeting 14 CFR Part 36 Stage IV noise standards.
• Have an either Class A or B cargo compartment as defined by Part 25.857.
• Service Ceiling - 28,000 ft. minimum based on optimum aircraft performance.
• Minimum Crew - Two crew members (pilot/copilot).
• Maximum Gross Take-Off Weight - Not to exceed 170,000 lbs.
• Capable of operating from a 5,000 foot unimproved landing strips.
• Have a minimum of capacity of 40 passenger seats (this can be authorized by an STC'ed modification.)
• Payload of at least 34,000 pounds with 3 hours and 30 minutes (3.5 hours) of fuel per manufacturer's direction while considering fuel management.
• Cruise airspeed of at least 300 knots true airspeed at 20,000 MSL.
• Capable of being modified to accommodate a 3000 U.S. gallon or greater gravity retardant tank system with retardant weighing 9.0 lbs. per gallon.
• Designed and manufactured for missions similar to the maneuver load impacts of the wildland fire airtanker mission.

At the present time, the U.S. Forest Service anticipates releasing a solicitation by August for the aircraft purchase.

If you believe that you have an aircraft that has these capabilities, submit a proposal to the USFS no later than March 20.
at February 27, 2015 1 comment: 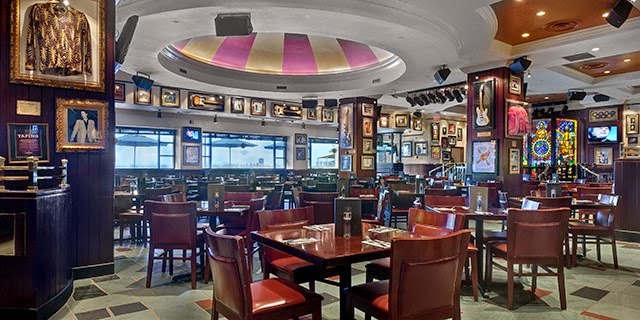 At this time, Hard Rock International intends to operate its Atlantic City cafe location through the balance of its lease, the company said in a press statement Thursday. “The company will not close the location unless the Taj Mahal, the casino in which the cafe resides, closes,” Hard Rock management said.

Conditional notices required under the Worker Adjustment and Retraining Notification Act were issued to employees in the event that the Taj Mahal bankruptcy plan is not approved, resulting in the closure of the Taj Mahal. These notices provide employees with appropriate advance notice of the possibility of Taj Mahal closure.

“Since opening its doors in 1996, the brand has been and continues to be committed to Atlantic City and brand expansion within New Jersey,” Hard Rock said.

With a total of 198 venues in 63 countries, including 152 cafes, 21 hotels and 10 casinos, Hard Rock International is one of the most globally recognized companies.
at February 26, 2015 No comments: 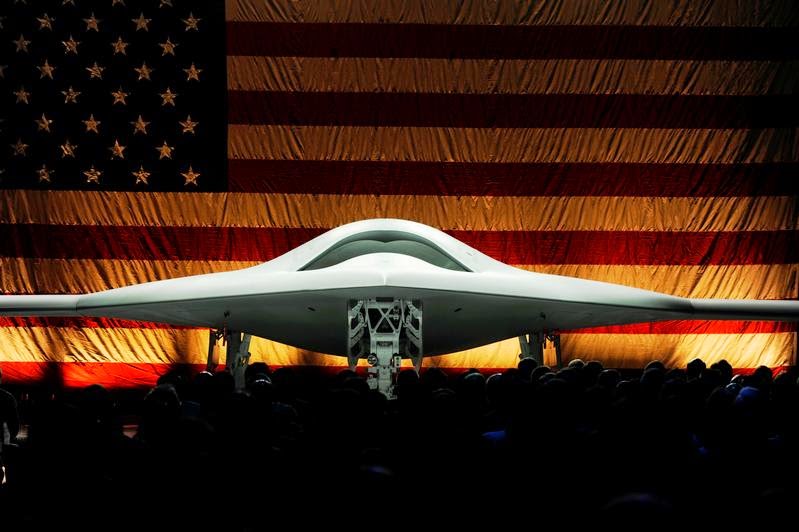 The U.S. Navy's Program Executive Office for Unmanned Aviation and Weapons, PEO(U&W), is planning to conduct an Industry Day meeting and follow-on Idea Days to provide opportunities for industry to learn about the technology needs of PEO(U&W) with the potential for follow-on briefings regarding technologies that industry has developed.

“This opportunity is open to all companies that have new and innovative ideas to support the future of Naval Aviation Unmanned Air System (UAS) and Weapon programs,” the Navy said in a Special Notice released Tuesday.

The Industry Day meeting will be held April 16 at the Bay District Volunteer Fire Department Social Hall in Lexington Park, Md. The Idea Days meeting will be an opportunity for industry to brief the Navy on developed technologies that may benefit PEO(U&W) UAS programs.
at February 25, 2015 No comments: 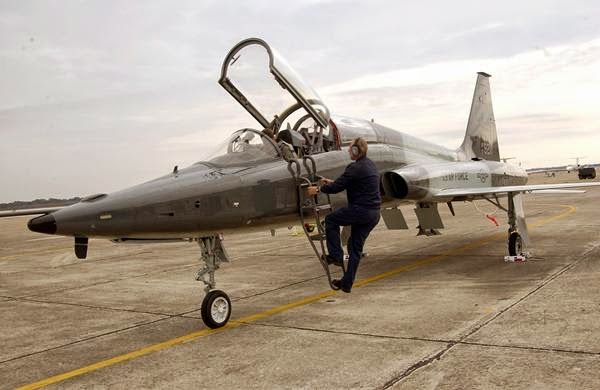 The T-38 aircraft has undergone a number of structural retrofit programs since its initial acquisition by the U.S. Air Force. Each of these retrofit programs has either replaced or repaired major structural components within the T-38 fuselage. The PC III program will replace major longerons, bulkheads/formers, internal skins and structural floors.

The contractor, CPI, will provide 74 aircraft kits used for structural modifications to sustain the T-38C aircraft. The work will be performed in Edgewood and is expected to be complete by Feb. 23, 2021. The Air Force Life Cycle Management Center, Hill Air Force Base, Utah, organized the contract award.
at February 24, 2015 No comments: 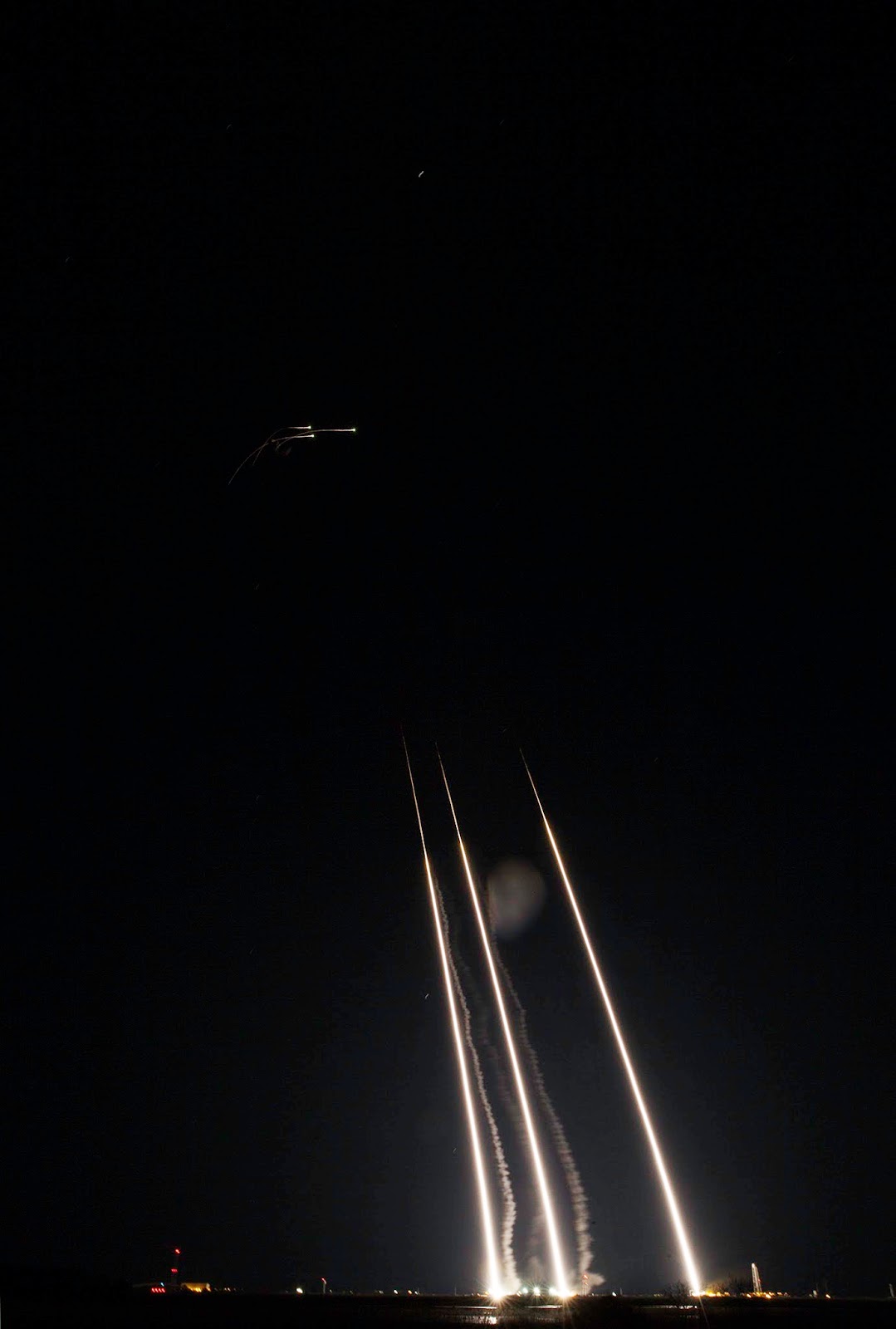 No SM-3 guided missiles were launched, the test did not include an attempted intercept.

This test was designated Flight Test Other-19. This was the first flight test to assess the ability of the Aegis BMD 4.0 weapon system to simulate engagements of a raid consisting of three short-range, separating ballistic missile targets. This was also the first time Aegis BMD 4.0 ships used the DWES capability with live targets.

The MDA will use test results to improve and enhance the Ballistic Missile Defense System and support the advancement of Phase 2 of the Phased Adaptive Approach for missile defense in Europe to provide protection of U.S. deployed forces, our European allies and partners.

Aegis BMD is the naval component of the MDA's Ballistic Missile Defense System.

CUBRC Inc., Buffalo, New York, was awarded a $32,678,236 contract for research, testing and analysis of supersonic and hypersonic vehicles and their components at the Aerothermal Aero-Optics Evaluation Center to evaluate aero-dynamic, aero-thermal, aero-optics, aero-propulsion and multi-body separation effects.

The funding and work location will be determined with each order, with an estimated completion date of Feb. 22, 2020. The contract award was organized by Army Contracting Command, Redstone Arsenal in Alabama.
at February 23, 2015 No comments: 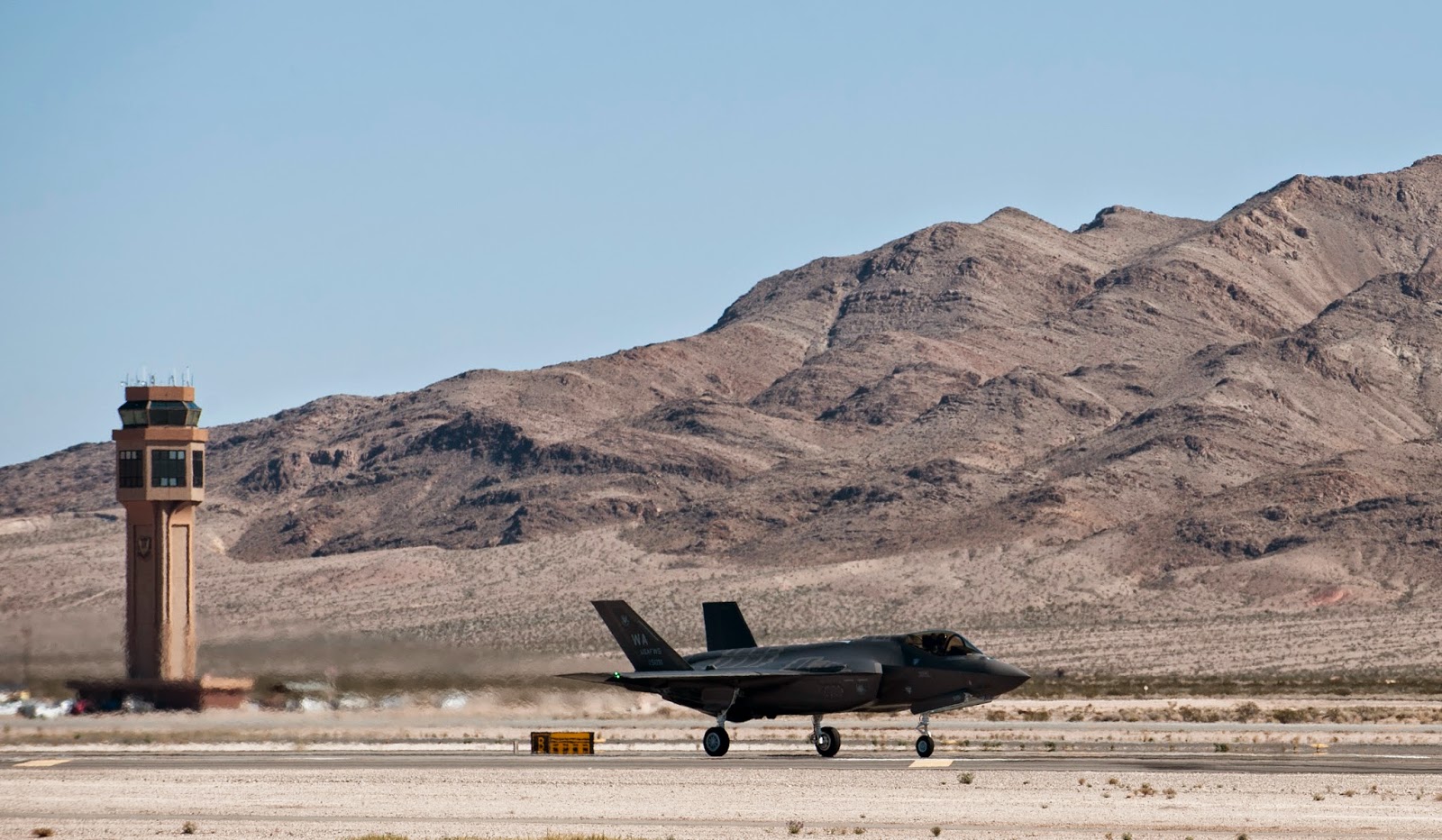 The U.S. Army Corps of Engineers Los Angeles District is soliciting a contract to design and construct an aircraft hangar and maintenance unit in support of the F-35 aircraft at Nellis Air Force Base in Nevada. In addition, the contract requires the design and construction of a maintenance unit to support F-15 Strike Squadron aircraft being relocated under this project. All three functions shall be housed in one facility, the Army said in contract documents released Friday.

The estimated construction price range for this project is over $25 million. Estimated duration of the project is 720 calendar days. The solicitation will be available to interested parties on or about March 6.

“All offerors are advised that this project may be delayed, cancelled or revised at any time during the solicitation, selection, evaluation, negotiation and/or final award process,” the Army said in contract documents.

The second F-35 Lightning II assigned to the U.S. Air Force Weapons School arrived at Nellis on Wednesday.
at February 22, 2015 No comments: 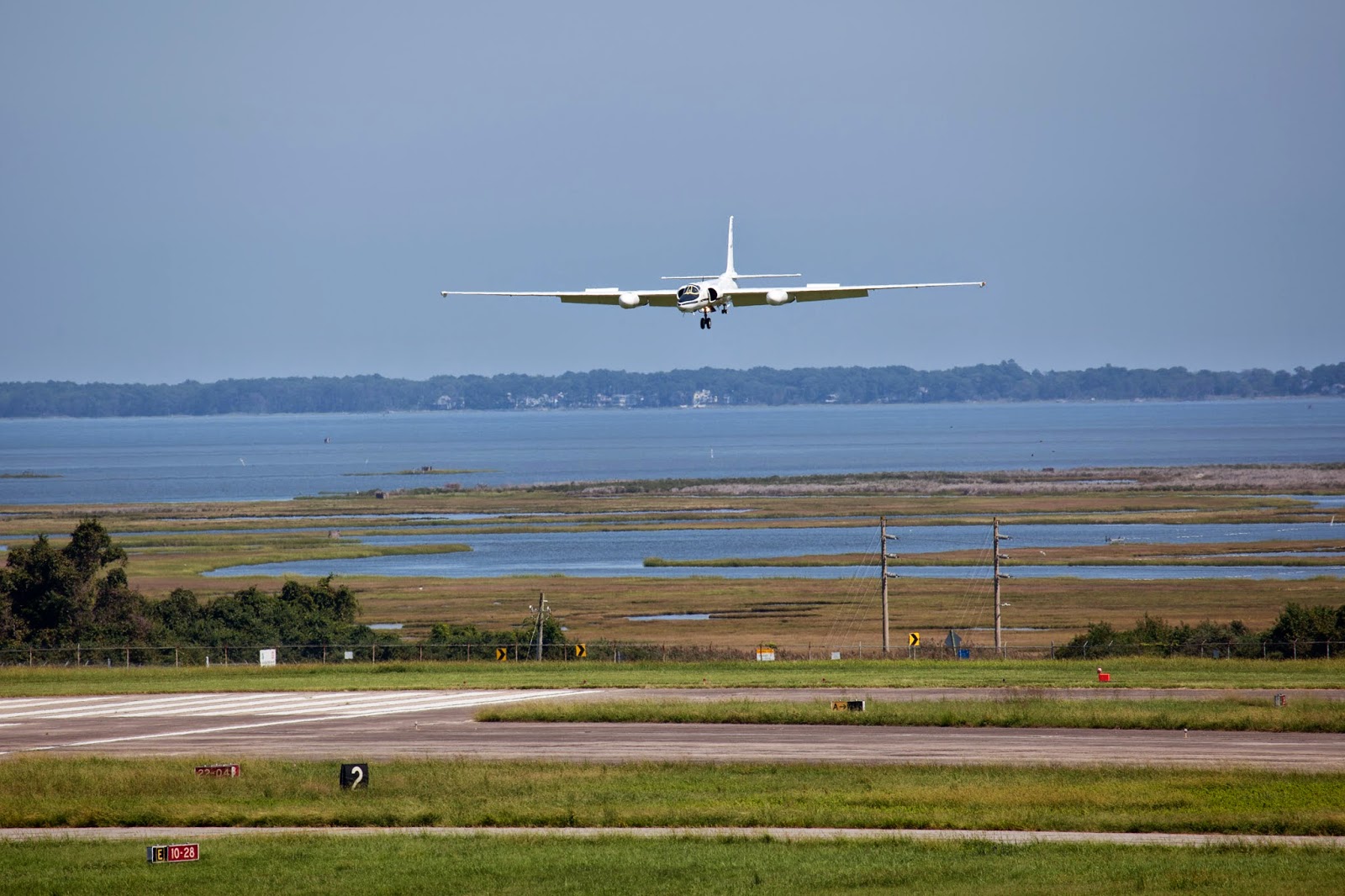 The two phase project will require:

The order of magintude of this requirement is more than $10 million.