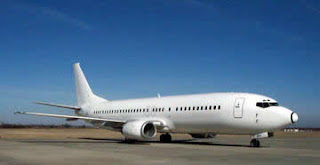 The U.S. Marshals Service, Justice Prisoner and Alien Transportation System (JPATS), Las Vegas, Nev., operational site, is seeking information from responsible sources and commercial agencies concerning the "Lease with the Option to Purchase" of one large transport category turbine powered aircraft to fulfill its unique mission objectives. The lease will include the aircraft, insurance, and limited maintenance for a base period and four option years, JPATS said in contract documents released Friday. JPATS will have the option to purchase the aircraft at any time during the lease period. JPATS has determined the following aircraft types meet their need: Boeing 737-700 (HGW) or Boeing 737-700ER. JPATS anticipates utilizing the aircraft approximately 900 hours annually.

The government is interested in feedback from the commercial market on the aircraft that may be available meeting these requirements. Capabilities packages, information and/or any feedback must be submitted to JPATS no later than Nov. 7.
at October 27, 2018 1 comment:

On Friday, Airbus welcomed Delta Air Lines as the first U.S. carrier to take delivery of the Airbus A220 aircraft.  On hand for the delivery ceremony at the aircraft's assembly line in Mirabel were members of the A220 team as well as government officials and executives from Delta, Airbus, Bombardier and Investissement Quebec.


Delta's A220 will enter service in early 2019, making Delta the fourth global airline to operate the aircraft previously known as the Bombardier C Series. The C Series Aircraft Limited Partnership (CSALP) welcomed Airbus as lead partner earlier this year, prompting the change of name to the Airbus A220.  Delta is the largest A220-100 customer, with a firm order for 75 aircraft. 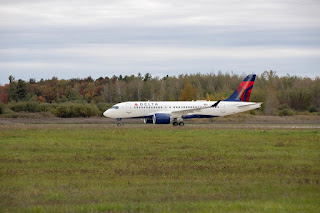 With an order book of over 400 aircraft to date, the A220 has all the credentials to win the lion's share of the 100- to 150-seat aircraft market, estimated to represent at least 7,000 aircraft over the next 20 years.

As of the end of September, Delta was operating a fleet of 235 Airbus aircraft, including 182 A320 Family members, as well as 42 A330s and 11 A350 XWB, or eXtra Wide Body aircraft. The airline has more than 275 additional Airbus aircraft on order. Next year, Delta will become the first U.S. airline to operate the new Airbus A330neo.
at October 26, 2018 No comments: