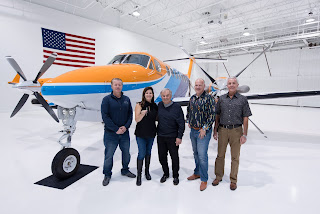 Textron Aviation proudly celebrated the entry into service and first delivery of its Beechcraft King Air 360 turboprop aircraft on Thursday. The event was commemorated in a special delivery to its launch customer – Stamoules Produce Company, Inc. The California-based business selected the King Air 360 as its first-ever aircraft purchase, Textron said in a company press release.

“When selecting our first aircraft, we looked for a product that would not only give us the performance and flexibility we need to grow our business, but also by a company with a trusted name and expertise in the industry – and we found that in the King Air 360 and Textron Aviation,” said Katie Stefanopoulos, a family member, who will also serve as corporate pilot for the new aircraft.

The King Air 360 cockpit features the addition of the Innovative Solutions & Support ThrustSense Autothrottle. The autothrottle supports pilots in their critical mission of delivering people or cargo by automatically managing engine power from the takeoff roll through the climb, cruise, descent, and go-around phases of flight. Another key update in the cockpit is the new digital pressurization controller, which automatically schedules cabin pressurization during both climb and descent, reducing pilot workload and increasing overall passenger comfort.

Other upgrades include a lower cabin altitude at the aircraft’s certified ceiling of 35,000 feet – more than 10% lower when compared to the King Air 350i. The improved cabin altitude level provides greater comfort for passengers, especially during longer flights.