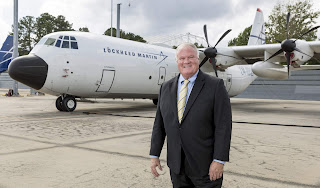 Lockheed Martin introduced Pallas Aviation as the first LM-100J commercial freighter operator on Thursday. The LM-100J is a production variant of the proven C-130J Super Hercules, which is the military airlifter of choice for 18 nations around the world.
Pallas Aviation will provide management services and operational control of two LM-100J aircraft requiring heavy-lift/oversized cargo capability into and out of unconventional airports and remote locations for a specific set of clients in multiple industries. Pallas will operate its LM 100Js out of Fort Worth Alliance Airport in Texas.
In conjunction with this announcement, an LM-100J aircraft will be on static display at the Alliance Air Show in Fort Worth on Saturday and Sunday.
Lockheed Martin introduced the LM-100J freighter in 2014 as an updated version of the L-100 legacy Hercules commercial variant. Lockheed Martin delivered more than 100 L-100s to private and government operators from 1964-1992.
Two LM-100Js are currently flying in support of FAA type certificate update testing.
at October 11, 2018 No comments: 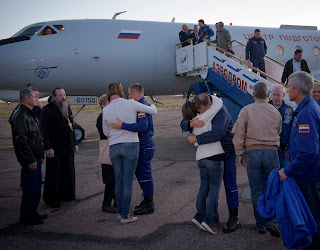 A Russian Soyuz spacecraft launched from the Baikonur Cosmodrome in Kazakhstan to the International Space Station on Thursday. Shortly after launch, there was an anomaly with the booster and the launch ascent was aborted, resulting in a ballistic landing of the spacecraft.
The crew who were aboard, NASA astronaut Nick Hague and Russian cosmonaut Alexey Ovchinin, are in good condition. After landing, the crew was transported to the Gagarin Cosmonaut Training Center in Star City, Russia, outside Moscow.
The Canadian Space Agency (CSA), a partner in the International Space Station program, is monitoring the situation. “Safety of the crew is the utmost priority for all space agencies,” CSA said in a statement following the launch abort. “A thorough investigation into the cause of the incident will be conducted by Roscosmos, the Russian space agency. It is not known whether this will affect Canadian astronaut David Saint-Jacques' launch date of Dec. 20, 2018.”
at October 11, 2018 1 comment:

The Boeing Company, Air Lease Corp. (ALC) and Air Tahiti Nui celebrated the delivery of the airline's first 787-9 Dreamliner, via lease from ALC. This is the first Boeing airplane to join the Tahitian airline, which plans to use the longest-range Dreamliner to replace aging A340s and connect its home base in the South Pacific with world capitals such as Paris, Tokyo and Los Angeles.

The airplane can fly up to 7,635 nautical miles (14,140 kilometers), while reducing fuel use and emissions by 20 to 25 percent compared to older airplanes.

The airline announced in 2015 it would lease two 787s through ALC and purchase two 787s directly from Boeing as part of its plan to upgrade its fleet for the future.
at October 08, 2018 No comments: 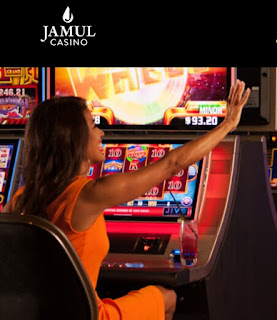 The Jamul Indian Village Development Corp. (JIVDC), an entity owned by Jamul Indian Village of California, announced Monday that Jamul Casino has made numerous key hires as part of its rebranding and relaunch.  Approximately 20 miles east of downtown San Diego, Jamul Casino rebranded in May, and celebrated a relaunch in August. Completing its transition, JIVDC has welcomed several key managers to the Jamul Casino team.

Jamul Casino hired new President and General Manager, Mary Cheeks, to lead the transition. Cheeks has 30 years of experience in casino management and casino finance. One of her career highlights includes her pivotal role in transforming Harrah's Casino in Atlantic City, N.J., into a resort that became one of the most profitable gaming establishments in Atlantic City. Prior to joining the Jamul Casino team, she was General Manager for Rivers Casino & Resort in Schenectady, N.Y., one of four new casino licenses outside of Tribal Gaming and Racinos.

Cheeks has recruited a world-class management team at Jamul Casino consisting of:
As part of its relaunch, Jamul Casino has developed a new logo and identity focused on being friendly, fun, and true to its roots. The word "Jamul" means "Sweetwater."
The official relaunch of the newly renamed Jamul Casino was marked with a block party celebration on Aug. 4. The event drew over 12,000 guests and produced some of the highest activity ever on the gaming floor and in its seven restaurants. The gaming floor has 1,700 slots with everything from penny slots all the way up to $100 slot machines, and 40 table games with over a dozen different types of live games.
The $460 million casino had been managed and operated by a Penn National subsidiary since its opening on October 10, 2016. JIVDC announced in May they would terminate that management agreement. JIVDC stated that the termination of the casino’s current management company agreement with Penn National is a natural next step toward economic self-sufficiency for the Jamul Indian Village.
California's San Diego County has an extremely active gaming community, home to nine casinos. According to the National Indian Gaming Commission, tribal casinos generated nearly $9 billion in revenue in California and Northern Nevada (which doesn't include Las Vegas) in fiscal year 2017, which is a 7.3 percent increase in revenue over the previous year.
at October 08, 2018 No comments: 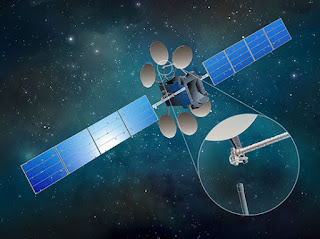 SSL, a Maxar Technologies company (formerly MacDonald, Dettwiler and Associates Ltd.), a leading provider of innovative satellites and spacecraft systems, has been selected as one of three companies qualified to compete for Department of Defense business under a contract called Small Spacecraft Prototyping Engineering Development and Integration – Space Solutions (SSPEDI). NASA's Ames Research Center in California's Silicon Valley manages the contract under an interagency agreement with the Department of Defense's Space Rapid Capabilities Office.


SSPEDI establishes a rapid and flexible method for the Department of Defense's Space Rapid Capabilities Office to acquire commercially-developed solutions for small to medium spacecraft and related systems from a pool of pre-qualified candidates. As one of the awardees, SSL is eligible to compete for multiple future awards over the five-year ordering period of the contract, up to a cumulative value of $750 million. To supercharge its offerings, SSL is harnessing the collective power of Maxar Technologies, and will closely partner with Maxar's geospatial insights company, Radiant Solutions. Radiant will study next-generation systems for Intelligence, Surveillance, and Reconnaissance and contribute its world-class mission engineering expertise to the company's solutions.
SSPEDI is one of many successes over the last year. Other recent progress and achievements that demonstrate momentum in the US government market include:
The company also continues to work across the U.S. Department of Defense, civil, and commercial space communities on several leading-edge programs and studies that aim to help U.S. government agencies define next-generation space technologies:
at October 08, 2018 1 comment:

Delta's first A220 scheduled to begin service in early 2019 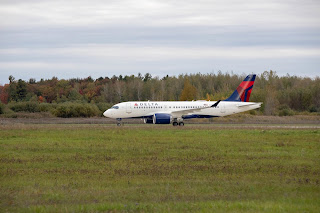 Delta Air Lines' first Airbus A220-100 took off on its first flight from Mirabel airport, Québec. The aircraft was crewed by A220 program test pilots. During the three-hour flight, the crew checked the aircraft's main systems and landed back in Mirabel.

The flight took place a few days after the aircraft rolled out of the paint shop. Next, the aircraft will continue with pre-delivery testing and assembly, as elements of its interior come together at the A220 assembly line. Delta's first A220 is scheduled to begin service in early 2019.

Delta Air Lines will be the first U.S. airline to operate the A220 – at the same time becoming the fourth A220 operator, after Swiss International Air Lines, airBaltic, and Korean Air. Delta is the largest A220-100 customer, with a firm order for 75 aircraft.
The A220-100 delivers unbeatable fuel efficiency.  It brings together state-of-the-art aerodynamics, advanced materials, and Pratt & Whitney's latest-generation PW1500G geared turbofan engines to offer at least 20 percent lower fuel burn per seat compared to previous-generation aircraft.
With an order book of over 400 aircraft to date, the A220 has all the credentials to win the lion's share of the 100- to 150-seat aircraft market, estimated to represent at least 7,000 aircraft over the next 20 years.
at October 07, 2018 2 comments: