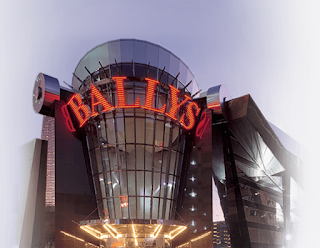 
"We look forward to the reopening of Bally's Atlantic City as soon as appropriate once the public health emergency related to COVID-19 has passed," said Caesars CEO Tony Rodio.

Chorus Aviation Inc. and its subsidiary Jazz Aviation LP announced Friday that Jazz and Air Canada will begin operating the recently approved Dash 8-400 Simplified Package Freighter developed by De Havilland Canada to short and medium haul markets under the Air Canada Express banner. These reconfigured aircraft will carry a total of 18,000 pounds [8,165 kilograms] of cargo in the passenger cabin and belly.

"This aircraft will allow us to provide critical cargo lift on short and medium-haul routes that have been impacted by the reduction of passenger flights," said Tim Strauss, Vice-President Air Canada Cargo. "The converted cabin, which can accommodate a cargo volume of 1,150 cubic feet is perfectly suited to loose load cargo like medical supplies, personal protective equipment and other goods needed to support the ongoing fight against COVID-19."

On April 11, Air Canada announced they had reconfigured the cabins of three of its Boeing 777-300ER aircraft to give them additional cargo capacity to transport COVID-19 supplies.
at April 24, 2020 No comments: 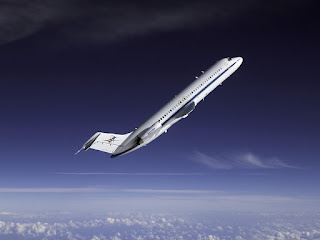 NASA's Armstrong Flight Research Center is interested in obtaining information from companies to identify potential commercial capabilities for Microgravity Flight Services (MFS) to provide brief periods of near zero, partial gravity, and hyper-gravity conditions, collectively referred to here as microgravity, and associated capabilities for payload integration, safety, and airworthiness for various government research, technology development, and training missions. The agency announced the MFS effort in a Request For Information document released on Monday.

In the past, NASA successfully achieved this mission and fully met the listed requirements by use of a slightly modified C-9 (military variant of the DC-9 commercial transport) aircraft flown, operated, and maintained by NASA flight and ground crews. More recently, aircraft and flight services were contracted by NASA to provide these services and were operated in accordance with Federal Aviation Administration (FAA) Advisory Circular (AC) 00-1.1A, “Public Aircraft Operations”. Under this AC, NASA was responsible for determining the airworthiness and flight safety of the contractor’s microgravity aircraft operations and maintenance. Upon the completion of a NASA mission the aircraft was returned to its original civil status and returned to service under FAA airworthiness regulations. It was the responsibility of the contractor to ensure compliance with all FAA regulations when returning an aircraft to civil use.

The objective of each flight is to accurately simulate the gravitational field present on the Moon, Mars, or on an asteroid for research in areas such as fluid physics, combustion, material sciences, and life sciences, engineering development (for the International Space Station and other space hardware programs); for education; and for astronaut flight crew training.

The typical operation involves one or more self-contained experiments that are installed on the platform and activated in flight during the microgravity periods by a human operator. Data is recorded, and experiments are often photographed. Upon completion of the flight, the experiment is removed to be refurbished and prepared for future flights. The experiments are usually observed and/or tended during flights by a human experimenter.

NASA is assessing the feasibility of obtaining microgravity flight services on a purely commercial basis. In such an operation, the provider will operate as a “civil aircraft” and bears full responsibility for airworthiness, flight safety, and mission assurance, and these services do not require the Public Aircraft Operation (PAO – ref. AC 00-1.1A) requirement.

NASA will meet with contractors on May 5 during a Virtual Industry Day meeting to discuss the Mircogravity Flight Services effort and answer questions.
at April 23, 2020 No comments: 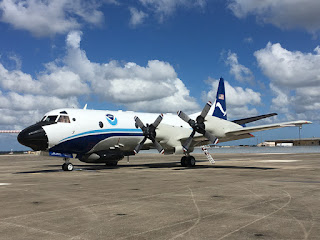 The National Oceanic and Atmospheric Administration Aircraft Operations Center operates and maintains two WP-3D (variant of the P-3 exclusive to NOAA) Lockheed Orion aircraft, N42RF and N43RF. These aircraft are flown in support of NOAA scientists primarily for the purpose of severe weather research in environments such as hurricanes and mesoscale thunderstorms. Both WP-3D aircraft were acquired from Lockheed Burbank in 1975 (N42RF) and 1976 (N43RF).

NOAA is looking for a contractor to continue inspections, repairs, servicing, and supply replacement items for the WP-3D aircraft to include: labor, materials and supplies, consumables and equipment, according to contract documents released Thursday by NOAA. The contract will run for 10 years. NOAA's Eastern Acquisition Division will be releasing a Request For Proposal on/or about May 7.
at April 23, 2020 No comments:

De Havilland Aircraft of Canada Limited and Jazz Aviation LP announced Thursday that Jazz will be the first operator for the recently approved Dash 8-400 Simplified Package Freighter. Under the agreement, Jazz has ordered the Service Bulletin and conversion kits for up to 13 Dash 8-400 aircraft.

“The reconfiguration of Dash 8-400 aircraft into Simplified Package Freighters can be quickly achieved by the removal of seats and seat track covers in the passenger cabin. The reconfiguration, which includes the use of up to 17 nets will provide a potential total payload of up to 17,960 pounds and a total cargo volume of up to 1,150 cubic feet per aircraft," said Todd Young, Chief Operating Officer, De Havilland Canada. "We will work with Jazz to quickly put their Dash 8-400 Simplified Package Freighters into service and look forward to supplying this solution to other Dash 8-400 aircraft operators around the world to assist in the re-deployment of their fleets to meet the growing demand for airlift of essential supplies during the COVID-19 pandemic."
at April 23, 2020 No comments: 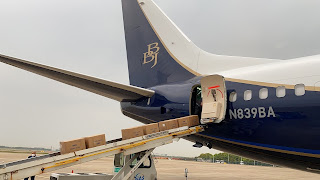 Boeing completed its first COVID-19 transport mission on Saturday, using a 737-700 aircraft from its corporate fleet to bring personal protective equipment from China to the United States. Working in partnership with FIRST Robotics Founder Dean Kamen, the company transported 540,000 medical-grade face masks that will be delivered to healthcare professionals battling COVID-19 in New Hampshire.

Kamen, who has a longstanding relationship with Boeing through FIRST Robotics, is also a founder of DEKA Research and Development Corporation (DEKA). He worked with DEKA to secure the face masks from manufacturers in China and turned to Boeing to facilitate their transport.

"Thanks to Dean Kamen for facilitating this deal, and to Boeing for donating the cost of this mission transport,” said Governor Chris Sununu.

Additional airlift transport missions with the Boeing Dreamlifter and ecoDemonstrator are planned in the future. Boeing is coordinating closely with U.S. government officials on how to best assist areas with the greatest need.
at April 20, 2020 No comments: