'Dark web,' a realm of the Internet unmonitored and anonymous 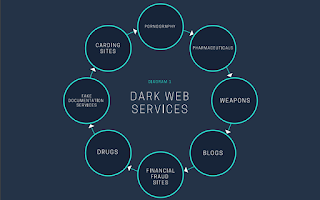 What is believed to be the first ever comprehensive report on the 'dark web' has been published by Intelliagg. Intelliagg monitors, collects and aggregates intelligence about organizations and individuals that could pose a threat to their clients. Although partial efforts to map the dark web have been attempted before, Intelliagg and Darksum are the first to employ hard data to paint a comprehensive picture of its contents. The report
accurately maps the dark web and offers valuable insights into the poorly understood realm of cyberspace.

Intelliagg found that, despite its reputation, only 48 percent of the sites on the dark web are illegal. Drugs featured 4 percent of the time, whereas weapons and pornography-fetish come up at less than 2 percent collectively. Leaked data (28 percent) and financial fraud (12 percent). Perhaps not surprisingly, the vast majority of information is in English (76 percent). German and Chinese are next at 4 percent and 3.7 percent respectively.

The most discernible differences between the Internet and the dark web lie in anonymity and size. The dark web is much smaller than commonly thought, a mere 30,000 sites - a small fraction of the size of the Internet. The Internet has a protective monitoring system that can block and remove illegal or harmful websites and has the capability to identify users. By its very nature, the dark web depends on its anonymity. Users are unidentifiable and untraceable, websites are hard to find, unless you're in 'the know', and sites on the dark web cannot be reached without the use of specialized encryption software.

Intelliagg's research has identified a number of serious security threats. These include a major Western democracy, where it is possible to view private addresses, social security numbers and photos of key government personnel, policemen, judges and even the secret service. It is then just a click away to find a hit man and a menu of their fees. Intelliagg have forwarded these findings to the relevant government's security services.

The research also exposed commercial risks, such as employees of banks advertising their services, such as laundering money, to interested bidders. This is a recurring problem that has strong links to organized crime rings.

A spokesman from Intelliagg explained; "The dark web is renowned for illicit and illegal trade, unmonitored and anonymous. Not any more. We have successfully penetrated into the darkest parts using specialist software and our expertise. We are now using this information to protect companies, governments and individuals.”
at March 31, 2016 1 comment: