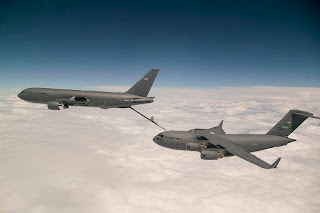 Under the Air Force's KC-46 modernization program, commercial aircraft are being converted by The Boeing Company into aerial refueling tankers. The program is one of the Air Force's highest acquisition priorities, and will replace a third of the aging fleet.

“We found that the program, now in its seventh year, is meeting its estimated acquisition cost. However, the program office projects that Boeing will not deliver the first 18 fully capable aircraft until May 2019—21 months later than initially planned,” the Government Accountability Office (GAO) said in a recent report. Boeing won the competition to develop the KC-46 aircraft in February 2011.

The total acquisition cost estimate for the KC-46 refueling tanker aircraft remained stable over the last year at $44.4 billion. This is about $7.3 billion, or about 14 percent, less than the original estimate of $51.7 billion, the GAO said.

Boeing faces the following risks and challenges and is trying to address them:
• updating test aircraft to the correct configuration to complete remaining tests;
• completing flight tests at a pace that is almost double its monthly average;
• updating test plans to reflect a more realistic schedule for certifying aircraft, such as F-16 fighters and C-17 cargo planes, to be refueled by a KC-46;
• retrofitting production aircraft to their final configuration for delivery; and
• fixing a critical deficiency to keep the boom from contacting receiver aircraft outside the refueling receptacle. 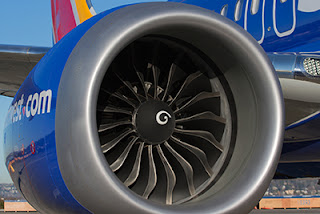 Aviation attorney Robert A. Clifford is calling for the grounding of all Boeing 737-700 aircraft in the wake of the second uncontained engine failure (UEF) of a 17-year-old Southwest Airlines 737-700 in less than 20 months.


Clifford, founder and senior partner of Clifford Law Offices of Chicago, represents a number of passengers injured in a fire after a similar UEF on an American Airlines 767 at O'Hare Airport in October 2016.

In August, 2016, Southwest Airlines Flight 3472 from New Orleans to Orlando experienced a UEF of the same engine (CFM56-7) involved in the UEF tragedy on Southwest Airlines Flight 1380. The National Transportation Safety Board (NTSB) has not completed its investigation into Flight 3472 but in August of 2017 the Federal Aviation Administration (FAA) issued a Notice of Proposed Rulemaking to require fan disk inspections on all CFM56-7 engines as a result of the NTSB's findings to date. Such inspections might have prevented the tragedy on Flight 1380 and Southwest Airlines and CFM  International (engine manufacturer) should not have waited negligently for the FAA to issue this notice before taking action to prevent death and injury, according to Clifford.

The NTSB already has revealed that a fan blade is missing from one of the engines on Flight 1380, leading to now two UEFs due to CFM56-7 fan disk failures in less than 20 months, and an innocent mother of two is dead because of it, the law firm said in a statement.

“The flying public does not have another 20 months for the NTSB and FAA to take action - the 737-700 fleet must be grounded until each airplane's engines are inspected for such fan disk flaws and an acceptable longer-term inspection and replacement plan is finalized,” Clifford said. “This is drastic action but we now have positive proof of the deadly and negligent consequences of not doing so.”

Clifford served as co-lead counsel in yet another similar UEF accident involving United Airlines Flight 232 where an engine exploded in mid air in July, 1989, and the DC-10 wide body airliner crash landed at Sioux City, Iowa, killing a number of people and injuring my more as it chartwheeled in flames down the runway.

"The General Electric/Safran CFM56 engines and 737-700 airplanes they are mounted on are just too dangerous to remain in the air until immediate initial inspections of each and every engine is conducted and a longer-term safety plan is implemented." Clifford said.

Clifford explained that the FAA should also consider changing airliner design requirements to provide better fuselage and passenger protection from UEF parts via tougher skin and window designs adjacent to the rotating parts of engines.

On Tuesday, Southwest Airlines announced that it is accelerating its existing engine inspection program relating to the CFM56 engine family. “The accelerated inspections are being performed out of an abundance of caution and are expected to be completed over the next 30 days,” Southwest Airlines said in a statement on their website. “The accelerated checks are ultrasonic inspections of fan blades of the CFM56 engines.” The airline expects minimal disruption to the operation during the course of the inspections.
at April 18, 2018 2 comments: