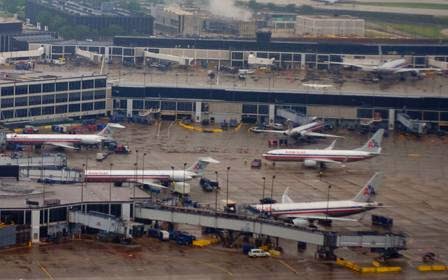 The Federal Aviation Administration (FAA) briefly delayed departures Monday for flights headed to O’Hare or Midway from Canada and Midwestern airports because of problems with several phone lines between the Chicago Terminal Radar Approach Control facility in Elgin, Ill., and the FAA’s adjoining en route centers. The FAA resolved the problem and lifted the delay restrictions at 5:50 p.m., EDT, 43 minutes after they were put in place.

Over the weekend, FAA technical teams working on restoring telecommunications systems at the FAA’s Chicago En Route Center in Aurora, Ill., removed all of the equipment and cabling that was damaged in the Sept. 26 fire at the facility. Cleaning crews removed the remaining soot and debris from the area. The FAA teams on site are continuing work to connect the new and existing equipment and test it to ensure all systems are running properly.
at October 06, 2014 No comments: 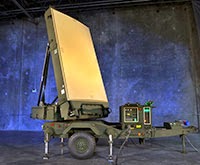 The U.S. Air Force awarded Raytheon Company a $19.5 million contract for engineering and manufacturing development of a new expeditionary radar that will detect, identify and track drones, missiles and aircraft. The total contract, including all options, is currently estimated at $71.8 million and includes the procurement of an additional three radar systems, for a total of six radar systems and product support. The radar, called the Three Dimensional Expeditionary Long Range Radar, or 3DELRR, is one of the first programs under the Department of Defense's Better Buying Power initiative to be designed for exportability, enabling U.S. forces, allies and security partners to benefit from the system.

Raytheon's 3DELRR system is a gallium nitride (GaN)-based radar that operates in the C-band of the radio frequency spectrum. By using GaN, Raytheon was able to affordably increase the radar's range, sensitivity and search capabilities. C-band also offers the military increased flexibility because that portion of the spectrum is relatively uncongested.

3DELRR will replace radars, such as the Vietnam-era AN/TPS-75, which are no longer able to keep pace with current and emerging threats.
at October 06, 2014 No comments:

Federal Aviation Administration (FAA) technical teams expect to complete the removal of all remaining fire-damaged equipment and cabling from the Chicago En Route Center in Aurora, Ill., by Monday morning. Meanwhile, replacement equipment continues to be installed and tested, the FAA reported Sunday.

FAA air traffic controllers continued to handle high volumes of traffic into and out of Chicago-area airports this weekend. The number of arrivals and departures at O'Hare were more than 90 percent of the two-month average for a Saturday, while total operations at Midway reached more than 95 percent.

The weather forecast for Monday calls for a chance of rain showers in Chicago, which could affect arrival and departure rates into both major airports.