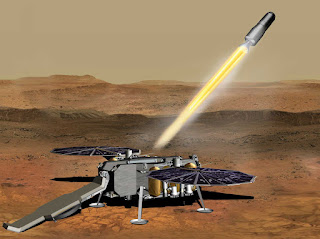 NASA’s Marshall Space Flight Center (MSFC) in Huntsville, Ala., is soliciting information from potential sources for the manufacturing of Radio Frequency (RF) Transmitters for the Mars Ascent Vehicle (MAV). The space agency made the announcement in a Request For Information contract document released Thursday.

The MAV is one part of the Mars Sample Return Campaign and is a joint effort between MSFC and the Jet Propulsion Laboratory in Pasadena, Calif. The MAV is a vehicle designed to launch from the surface of Mars and will transport Mars samples taken from the Martian surface and launch the payload into orbit for rendezvous with an orbiting spacecraft. The Earth Return Orbiter (ERO) will rendezvous with and capture the payload from orbit, and bring it back to earth.

The RF transmitter will be required to tolerate environments of launch, 2.5 years of deep space cruise, Entry, Descent, and Landing, and a storage period of approximately one year on the Martian surface. Note that the RF transmitter will be in an unpowered state for a majority of the cruise except for short durations during health check-outs. For planning purposes, this requirement will involve the design, development, manufacture, testing, qualification, and delivery to NASA/MSFC of multiple RF transmitter units.  Due to the design configuration of the MAV, mass (minimal) is a key factor in determining the selected RF transmitter.

US Marshals Service shopping for a Boeing 737 aircraft

The primary mission of JPATS is the safe, secure and efficient transportation of federal and non-federal prisoners and the provision of aircraft and flight crew for the support of other operational missions. Additional mission assignments include international flights in support of foreign extraditions, witness security and enforcement operations, strategic deployment of USMS and Special Operations Group personnel and equipment and other special operations assigned by the USMS or U.S. Attorney General.

JPATS says a Boeing 737-700 or 737-800, transport category, narrow body, twin-engine jet aircraft will fit the lease requirement. The aircraft will be operated primarily from the JPATS Oklahoma City operational site but may at times, based on particular mission demands, operate from the JPATS Las Vegas operational site. The period of performance under the lease will be a base period: Oct. 1, 2021 through Sept. 30, 2022, with four Option Years. JPATS will have the option to purchase the aircraft at any time during the base period or the option years.

Based on current mission flying schedules, JPATS’ estimated utilization rate for the proposed aircraft is approximately 1,290 flight hours or 900 takeoffs and landings per year. “Flight Hour” by definition is “wheels off” during takeoff to “wheels on” during landing. The actual hours and cycles will vary due to scheduling demands. JPATS will pay a monthly firm-fixed price lease rate for the aircraft through the leasing period for unlimited use of the aircraft. If JPATS elects to purchase the aircraft (at a firm-fixed price) the monthly firm-fixed price lease rate will cease on effective date of the purchase.

This is a “dry” lease, which includes the aircraft, insurance, and heavy maintenance. JPATS has determined that only the Boeing 737-700 or the Boeing 737-800 will meet our unique mission requirements. 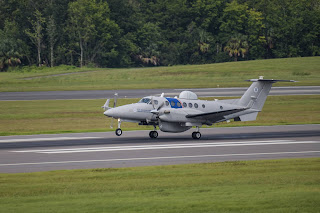