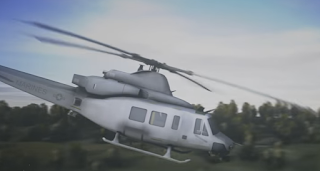 At the AACUS flight testing event held Thursday in Northern Virginia, the program demonstrated on a manned Bell 206 the capabilities required for autonomous takeoff, transit and landing.

"You're not buying a new fleet of helicopters, you're buying a capability set for your current fleet," said John Wissler, vice president of Aurora's R&D Center in Cambridge, Mass. "TALOS is not an aircraft, nor is it a robot flying an aircraft -TALOS is transferable intelligence designed with both manned and unmanned aircraft requirements in mind.”

Commercial applications for the TALOS technology are also being explored by Aurora. "Think of the civilian first responder pilot attempting to land in a remote, storm-ravaged area at night - TALOS senses and alerts to power lines and landing zone obstacles well before the pilot and informs the pilot's maneuvers," said Wissler.

The final phase of the AACUS program will transition the TALOS system onto an autonomous UH-1H platform currently under development at Aurora, with culminating demonstrations occurring in 2017-2018. Aurora's TALOS system is being developed with funding from the Office of Naval Research.

Unmanned drone use could increase cyberattacks

AT&T and NASA are researching the development of an Unmanned Aircraft System Traffic Management solution that would support the safe and highly secure operation of drones in the national airspace.

AT&T has been working with NASA and other companies to make UAS flight path monitoring, flight planning, navigation, surveillance and tracking safer. “We have focused on the role of wireless networking and advanced technologies,” the company said in a press release.

AT&T brings expertise in networking, Internet of Things, cloud, identity management and cybersecurity to the effort.

A key element AT&T and NASA are researching is the potential impact of cybersecurity threats. The vast availability of drones - and their many current and potential uses -- could increase their risk of cyberattacks. AT&T advocates cybersecurity protections designed into the system from the outset.

Chris Penrose, president of AT&T's Internet of Things Solutions, was selected as a member of the FAA's Drone Advisory Committee earlier this year. The group identifies and advises actions to support the safe introduction of UAS into our national airspace.
at November 10, 2016 No comments: