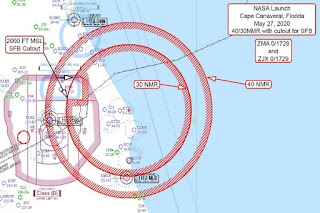 The NOTAMS are in preparation for NASA’s historic manned space flight to the International Space Station aboard the SpaceX Crew Dragon capsule. This is the first launch of astronauts to Earth orbit on an American-built spacecraft from American soil since 2011.

“The FAA’s role is to ensure the safety of the airspace by prohibiting all aircraft operations within 30 nautical miles of NASA’s Kennedy Space Center during the reported timeframe unless the operation is exempted,” the agency said on Tuesday. “There are three types of NOTAMs: airspace, to close the airspace near the launch; flow, to provide route guidance to aviation operators; and security, to implement security measures for aircraft and Unmanned Aircraft Systems (UAS) in the area."

Pilots who do not comply with the requirements, special instructions or procedures in the NOTAM may be intercepted, detained by law enforcement, and subjected to any of the following additional actions:
at May 26, 2020 No comments: