New imaging satellite will be able to identify mailboxes from space 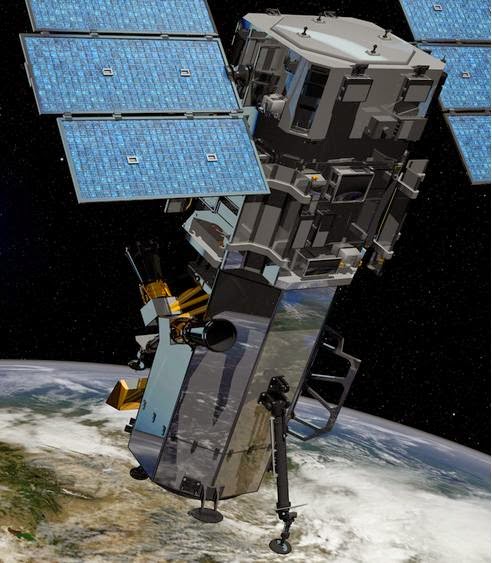 Ball Aerospace & Technologies Corp. has delivered the next-generation commercial remote sensing satellite built for DigitalGlobe to a launch site at Vandenberg Air Force Base, Calif. The WorldView-3 satellite is slated to fly aboard a United Launch Alliance Atlas 5 rocket in mid-August for DigitalGlobe, a leading provider of commercial high-resolution earth observation and advanced geospatial products.

The WorldView-3 spacecraft passed a full suite of environmental, functional and performance tests in preparation for integration with the launch vehicle, along with thorough pre-ship reviews by Ball Aerospace and DigitalGlobe.

WorldView-3 is the first multi-payload, super-spectral, high-resolution commercial satellite for earth observations and advanced geospatial data. Operating at an expected altitude of 383 miles (617 kilometers), WorldView-3 will collect imagery with 12 inch resolution (31 centimeters). "At 30-60 centimeters, you can easily discern key features such as manholes and mailboxes," according to DigitalGlobe's website. This level of resolution performance would be fundamentally impossible without the four-foot (1.1-meter) aperture telescope and the primary visible/SWIR sensor built by Exelis, which allows for a breadth of applications unmatched by smaller, lower-performance satellites. DigitalGlobe recently received permission from the U.S. Department of Commerce to sell its higher resolution satellite imagery, and once WorldView-3 is operational, the company will be able to deliver imagery with significantly greater clarity and spectral depth than anything else on the commercial market.

The range of customer applications enabled by the DigitalGlobe constellation is greatly expanded by WorldView-3's ability to sense both the visible spectrum as well as deeper into the infrared spectrum. Its data-rich imagery will enable customers to search for new sources of minerals and fuels, manage forests and farms, and accelerate DigitalGlobe's creation of Geospatial Big Data - a living inventory of the surface of the earth.

WorldView-3 builds upon WorldView-2 and WorldView-1 technology by carrying forward the satellites' advanced Control Moment Gyroscopes (CMGs). The CMGs reorient a satellite over a desired collection area in 4-5 seconds, compared to 30-45 seconds needed for traditional reaction wheels. This enables the WorldView satellites to collect large areas far faster than competing satellites.
at June 29, 2014