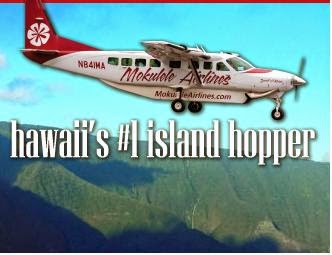 Mokulele Airlines will host a grand opening celebration on Tuesday at the airline's newest service location, Kalaeloa Airport on west Oahu, marking the successful conclusion of a year of preparations. Kalaeloa is located at the former Barber's Point Naval Air Base John Rogers Field. The grand opening and inaugural flight will take place 15 years to the day that the former base was closed and turned over to the State of Hawaii.

Dignitaries from the Hawaii Department of Transportation will be in attendance and Kahu Daniel "Kaniela" Akaka, Jr. will offer a traditional Hawaiian blessing of the airport and the plane that will make the inaugural flight.

July 1 will mark the beginning of Mokulele's daily nonstop service to Kahului, Maui from Kalaeloa, with six scheduled daily flights, three each way. The inaugural flight to Kahului will depart at 1:00 p.m. The grand opening celebration is open to the public.

Kalaeloa will be the ninth airport Mokulele serves. As with most of the other airports Mokulele operates from, parking is hassle-free and Transportation Security Administration screenings are not required.

Mokulele Airlines, flying the skies of Hawaii since 1994, was purchased by TransPac Aviation, Inc. in 2011 with a goal of providing high quality, low-cost interisland air service. Mokulele, which is headquartered in Kailua-Kona, now offers more than 120 flights a day connecting Oahu, Molokai, Lanai, Maui and the Big Island on its fleet of nine-passenger, turbine-powered Cessna Grand Caravans.
at June 30, 2014

It must have been a gran opening. i hope everything goes fine and the company earns success by leaps and bounds. gatwick chauffeur parking

Good luck for the new beginnings. i hope it turns out to be great. meet and greet gatwick