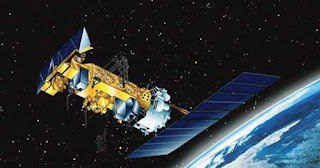 The U.S. Space Force's 18th Space Control Squadron (18 SPCS) has confirmed the breakup of NOAA 17 which was formally decommissioned by the National Oceanic and Atmospheric Administration (NOAA) in 2013 following an 11 year on-orbit operating life.

“Data indicates the breakup likely occurred March 10,” the Space Force said in a post on Twitter. The 18 SPCS is tracking approximately 16 pieces, which are being incorporated into routine conjunction assessment to support spaceflight safety. There is no indication that this breakup was caused by a collision with another object, Space Force officials said. NOAA 17 was launched into orbit in 2002.

A similar event happened in November 2015 when the U.S. military's Joint Space Operations Center investigated the breakup of the NOAA 16 weather satellite.

"There is no indication that this breakup was caused by a collision with another object, Space Force officials said".
So what else would cause a satellite to break into so many pieces?

A Defense Meteorological Satellite Program (DMSP) satellite exploded in orbit several years ago. A sudden temperature spike in that spacecraft led spacecraft engineers to conclude a battery in the spacecraft ruptured because of a design flaw. Seven other DMSP spacecraft have a similar design flaw. Parts on satellites, fuel lines or fuel tanks, age over time also and maybe explode?

Thanks Keith. I was only thinking that things from 'outside the box' could affect it, I never considered that it could have been caused from 'inside the box'! Thanks for the education!