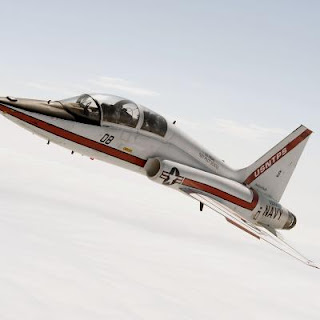 The U.S. Navy is following in the footsteps of the Air Force in an effort to find a replacement for their T-38C Talon aircraft trainers.

The Navy is looking for full spectrum logistical support (i.e. maintenance, training, publications, etc.) for a new aircraft on site at government provided facilities to be used as a key tool for future test pilot and flight test engineer training at the United States Naval Test Pilot School (USNTPS).

The T-38C replacement at USNTPS is unofficially being called the Test Advanced Jet (TAJ), the Navy said in the RFI. “The purpose of this RFI is to determine the feasibility and estimated cost for the TAJ and full spectrum logistical support for a contractor-owned, government operated service-based contract. The TAJ is considered a graduate-level trainer and should be able to fulfill the requirements set forth in the USNTPS fixed-wing syllabus, to include on-deck and airborne handling/flying qualities, performance, and mission systems testing.”

In general, a minimum of five, fully mission capable aircraft will be required daily to support a total of approximately 1,000 hours per fiscal year, the Navy said in the document.

Companies interested in responding to the RFI are invited to submit a capability statement to the Navy by July 22.