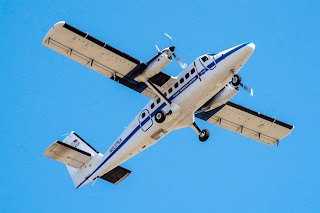 The National Aeronautics and Space Administration (NASA) is seeking flight operation support from an operator of a Twin Otter to conduct two science aircraft flight campaigns in Alaska that will measure snow and water quantities over the Earth in an effort to understand changes in snowfall amounts.

Snow, being so white, reflects up to 80% of the sun’s energy, acting to cool the planet. Loss of snow will result in Earth absorbing more sunlight, accelerating the warming that is already underway.

Since 1967, a million square miles of spring snow cover has disappeared from the Northern Hemisphere, an area the size of Argentina. Changes in global snow cover are altering global food production patterns, reducing hydropower generation, and forcing the closure of ski areas.

In an effort to understand snow fall quantities, NASA's Goddard Space Flight Center in Greenbelt, Md., developed a Snow Water Equivalent Synthetic Aperture Radar and Radiometer (SWESARR), a new instrument designed to measure the water content in a snowpack. The instrument uses active and passive microwave sensors to map the radio frequency emissions of the snowpack, which can then be turned into a measurement of snow water equivalent.

NASA plans to mount the SWESARR instrument on a Twin Otter DHC-6-300 aircraft.

The flights will occur in and around Fairbanks, Alaska, and be part of the larger NASA Snow Experiment (SnowEx) mission.

“SnowEx observation periods are not exactly known at the time of this writing,” NASA officials said in contract documents released on Friday. “The two SWESARR flight campaigns are planned to take place for two different snow conditions, pre- and post-snow fall. We are targeting pre-snow fall flights to take place in late October 2022 and post-snow fall campaign to take place in early March 2023. The instrument has flown in a similar SnowEx campaign in 2019/20 over the Grand Mesa, Colo., as well as earlier test flights.”

Up to 15 hours of science flights are to be conducted. “These science flights can take up to 10 days depending on weather conditions, issues with the instrument, coordination of flights with other instruments or crew emergencies,” NASA said.