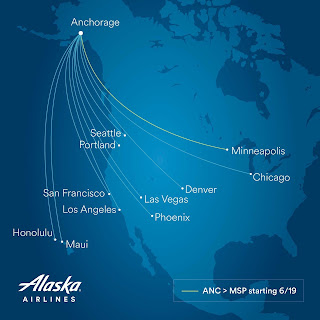 Alaska Airlines announced Friday new seasonal service at one of the airline's key hubs in Alaska with new nonstop service between Anchorage and Minneapolis-St. Paul. This additional nonstop flight means Alaska Airlines will provide the most nonstops from the state of Alaska than any other carrier.

The new service to the Land of 10,000 Lakes is in addition to the newly added nonstop service between Anchorage and Las Vegas, Denver and San Francisco, along with the expansion of year-round service to sunny Phoenix and Maui.

This summer, Alaska will fly nonstop to 11 destinations between Anchorage and the Lower 48 and Hawaii including: Minneapolis-St. Paul; Chicago; Denver; Honolulu; Maui; Las Vegas; Los Angeles; Phoenix; Portland, Oregon; San Francisco and Seattle. Four of the cities on the West Coast are also Alaska hubs, which allow for improved connectivity for guests traveling to other locations.