Europe's Ariane 5 rocket flexed its heavy-lift muscles on Saturday launching from French Guiana and placing the Galaxy 30 (G-30) and BSAT-4b communications satellites into orbit along with Mission Extension Vehicle-2 (MEV-2).


Designated Flight VA253, it marked the 253rd launch of an Ariane-series vehicle to date, and the 109th using an Ariane 5 rocket.

Today’s mission utilized an Ariane 5 ECA version rocket with increased payload capacity through the introduction of a new vehicle equipment bay for the launch vehicle. Since kicking off a continuous improvement program for Ariane 5 in 2016, prime contractor ArianeGroup has increased the launcher’s payload capacity by 300 kilograms. This raises the total mass of payload passengers that can be carried by Ariane 5 to 10,200 kg.; for today’s mission, the combined mass of G30, MEV-2 and BSAT-4b was 9,703 kg.

“This was the first time that we delivered three satellites to geostationary transfer orbit on a single launch, and it utilized the most capable Ariane 5 ever,” said Stéphane Israël, the Arianespace Chief Executive Officer. 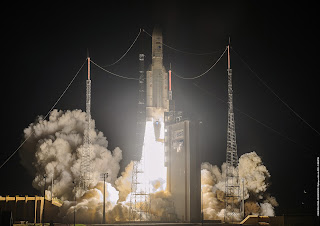 Deployed first in the flight sequence 27 minutes after liftoff, G-30 is the 62nd satellite Arianespace has launched for operator Intelsat, continuing a business relationship that extends back to 1983. It was produced by Northrop Grumman based on its GEOStar-2 platform, and will provide UHD video distribution/broadcast and broadband services that cover North America.

MEV-2 is designed to dock with geostationary satellites whose fuel has nearly depleted, thereby extending their useful lifetimes. MEV-2 will rendezvous and dock in early 2021 with the Intelsat 10-02 (IS 10-02) satellite, originally launched in 2004. The Mission Extension Vehicle is to utilize its own thrusters and fuel supply to control the IS 10-02 satellite’s orbit.

Including G-30 and MEV-2, Arianespace has now orbited a total of 30 spacecraft produced by Northrop Grumman or its companies.

The lower passenger in Ariane 5’s multi-payload configuration was BSAT-4b, which was orbited for the Japanese operator B-SAT. Produced by Maxar Technologies, it uses this manufacturer’s popular 1300-class spacecraft bus for commercial communications satellites.

BSAT-4b is designed for Ultra-High-Definition (UHD, 4K and 8K) direct-to-home television broadcasting across Japan in conjunction with its twin, BSAT-4a – which was launched by an Ariane 5 in 2017. All of BSAT’s 10 satellites have been orbited on Arianespace mission.