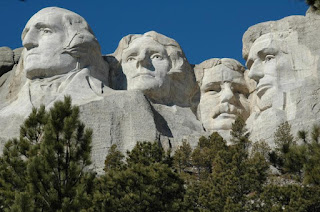 To commemorate the 100th anniversary of America's National Park System, Expedia.com commissioned a study of American attitudes toward which American president they would choose to add to Mount Rushmore, if given the chance.

The study was conducted from Feb. 26-29, and included responses from 1,039 American adults.

Americans were presented with a range of modern American presidents and asked to select the one they would choose to add to Mount Rushmore, alongside George Washington, Thomas Jefferson, Abraham Lincoln and Theodore Roosevelt. Franklin Delano Roosevelt was the runaway winner, chosen by 29 percent of Americans.


Americans also were given the option of writing in the name of a famous person - not a president - who they would like to see added to the monument. The most common recommendation was Martin Luther King, Jr., who was named by 11 percent of Americans. The top five non-presidential Mount Rushmore nominees include:


When asked to name the "most beautiful" national park, the same five parks were cited, only in a different order.


When asked which national parks landscape, monument, or feature Americans would "most like to take a selfie in front of," the top five selections were:
Posted by Keith Stein at 11:38 AM


I would not add any other face to the already beautiful monument...


I would not add any other face to the already beautiful monument...

The monument is an eyesore and a slap in the face to the First Nations people who were already here.