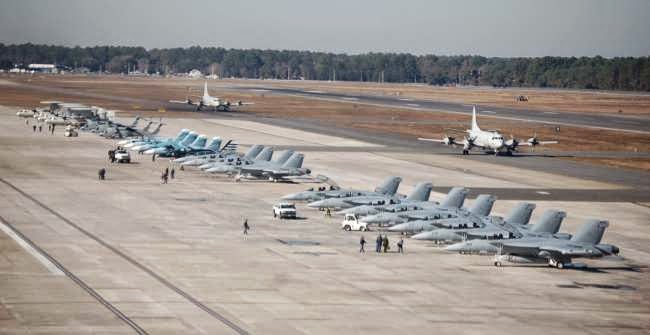 The U.S. Navy in Jacksonville, Fla., is conducting a market survey to determine the availability of vendors for Fleet Readiness Center Southeast (FRCSE) which is an industrial facility that accomplishes rework, repair, and overhaul of various aircraft, engines, and components located at Naval Air Station Jacksonville (NAS Jax), Duval County, Fla.


“This requirement is to provide escort transportation services for military aircraft on public roads between NAS Jax and the Cecil Commerce Center (CCC) for a total of 60 moves during the period from March 1 through Oct. 31, 2015,” the Navy said in contract documents released Tuesday. “The government will provide the tow equipment and a driver for the movement of the aircraft and obtain a blanket permit from the Florida Department of Transportation (FDOT) authorizing the tow of aircraft on public roads between NAS JAX and CCC.”

The contractor will provide all labor, supervision, vehicles, equipment, law enforcement escorts, and any other items necessary to transport aircraft to include coordination with Jacksonville Sheriff's Office, FDOT, as well as the safety offices and security departments of FRCSE, NAS Jax, and CCC.

The aircraft will be reduced to the smallest size possible, ranging in height from 9-17 feet, width ranging from 16-34 feet, and length ranging from 28-61 feet. Tows will typically be Tuesday and Thursday from 1:00 a.m. to 5:00 a.m. and involve only one aircraft, but the contractor must be prepared for other days/times and for two aircraft at a time.

Delhi Moods Company is one of the famous and leading company from which help you can take the services of Escorts and Call Girls. If you want to learn more about our company then visit our website www.delhimoods.in

Nikitaescortsdelhi company is providing escort services from last 10 years with full of Safety and Enjoyment. You don't need to arrange the room for your Dream Girl, Just call us and get your selected girl. I have already booked so many room in hotels of Delhi. For more information visit our website www.nikitaescortsdelhi.in

if you are want to enjoy your night with your selected dream girls then visit our website Mayaescorts. We are providing all types of services like Naughty Model Escorts, Sneaky Independent Delhi Escorts and Luscious Delhi Escorts.