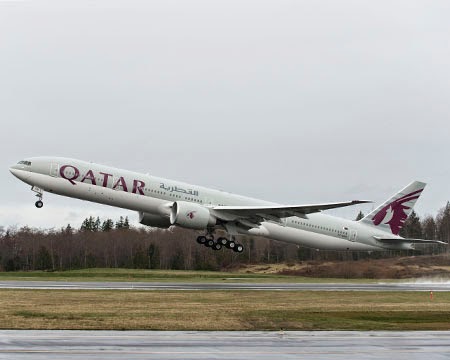 The airline's CEO was on-board the maiden flight and led a high level delegation, including the Director of Miami Airport, Emilio Gonzalez; the Vice Chairman of the Greater Miami Convention and Visitors Bureau, senior officials from the airline and also a group of international media traveling on the first flight.

During the courtesy visit, Al Baker said that “the airline planned to bring new opportunities to Miami by investing in the community and helping boost trade, tourism and business links between the State of Qatar and Miami.

"Qatar Airways is looking forward to how this new route will enhance our excellent offering to passengers, providing even greater flexibility in the number of U.S. gateways to choose from, since we now fly out of six major hubs in the country.

"Miami has always been a global city; a crossroads of commerce, art and culture. Mayor Gimenez has been a great ally in our efforts to bring Qatar Airways to Miami and we are proud to offer an additional boost to the local economy, by contributing to the generation of an estimated 536 new jobs and create an economic impact of over $78 million revenue for the first year alone."

"Qatar Airways' decision to include Miami among its handful of U.S. destinations confirms that Miami-Dade County is a global center for business and tourism travel, and MIA is one of the premier airports in the world,” said Gimenez. "Miami-Dade looks forward to strengthening the economic and cultural ties to Qatar and beyond."

Miami International Airport is responsible for over 20 million international passengers each year. Qatar Airways will fly four round-trip routes each week (Tuesday, Thursday, Saturday and Sunday) between Doha and Miami.

"Qatar Airways looks forward to building a strong relationship between Miami and Doha," added Al Baker. "These two great cities have so much to share and learn from one another. We can now look forward to introducing many more U.S. travellers to Doha and developing a strong conduit for trade and commerce."
at June 11, 2014