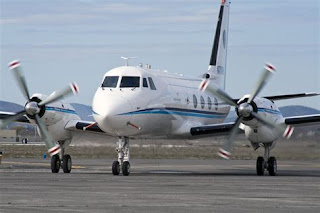 
Aircraft types: (only one aircraft will be purchased from this list)
• Bombardier Dash 8 Q300
• ATR 42-500/600
• Bombardier CRJ 200
• Bombardier Challenger 800/850
The purchased aircraft will need modifications to convert it into an aircraft that will be able to be fitted with instrumentation used for atmospheric research.
All original passenger seats (unless they have four or five point harnesses installed) shall be removed from the cabin. All overhead bins shall be removed except for the four bin spaces in the aft most section and the two bins in the forward most section of the aircraft. Quick connections for oxygen masks shall be installed. The cabin shall have a minimum of five and maximum of seven seats installed.
An atmospheric research aircraft rarely operates at designed cruising altitude and speed. The aircraft will routinely operate at altitudes between 1,000 feet to 5,000 ft above ground level. The aircraft will nominally operate at indicated air speeds of 180-190 knots with engines at 50 percent power. Ambient temperatures at these altitudes can often exceed 90 Fahrenheit.
The contractor shall design and install a cooling system that can keep the cabin temperature at or below 75F. The occupancy of the aircraft is a total of two pilots and seven operators. This requirement is both on the ground during taxi and in the air.
Posted by Keith Stein at 6:41 PM