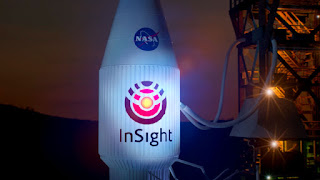 The early-morning liftoff on Saturday of the Mars InSight lander will mark the first time in history an interplanetary launch will originate from the West Coast. InSight will launch from Vandenberg Air Force Base, Space Launch Complex 3E in California.


InSight, which stands for Interior Exploration using Seismic Investigations, Geodesy and Heat Transport, will launch aboard a United Launch Alliance Atlas V rocket. InSight will study the deep interior of Mars to learn how all rocky planets formed, including Earth and its Moon. The lander's instruments include a seismometer to detect marsquakes, and a probe that will monitor the flow of heat from the planet's interior.

The Atlas V rocket will carry the spacecraft over the Channel Islands just off the California Coast and continue climbing out over the Pacific. The rocket will reach orbit about 13 minutes after launch, when the rocket is about 1,200 miles (1,900 kilometers) northwest of Isabella Island, Ecuador.

Getting a Mars mission flying requires a great many milestones. Among those still to come are the official start of the countdown to launch -- which comes on Saturday at 1:14 a.m. EDT. A little over an hour later, at about 2:30 a.m. EDT, the 260-foot-tall (80-meter) Mobile Service Tower -- a structure that has been protecting the Atlas V launch vehicle and its InSight payload during their vertical assembly -- will begin a 20-minute long, 250-foot (about 80-meter) roll away from the Atlas.