US looks to buy more seats aboard Russian spacecraft 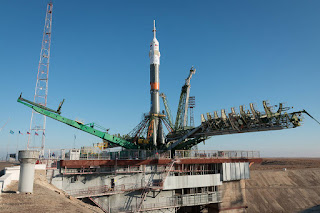 NASA is considering contracting with The Boeing Company for crew transportation services to and from the International Space Station (ISS) aboard Russia's Soyuz spacecraft, according to contract documents released Tuesday.

Boeing recently entered into an agreement with Russia's RSC Energia, manufacturer of the Soyuz spacecraft. As a part of the agreement, Energia agreed to provide to Boeing two specifically identified seats on the Soyuz spacecraft for long-duration travel to and from the ISS, one on a flight to occur in the fall 2017 timeframe and another on a flight to occur in the spring 2018 timeframe. Additionally, Energia provided Boeing three additional specifically identified seats in the spring 2019 timeframe on two Soyuz spacecraft. Boeing and RSC Energia have agreed that Boeing has full rights to these seats and can sell them to any third party.

NASA has contracts with two U.S. commercial companies for crew transportation to the ISS. However, these vehicles are still in the developmental stage, and not expected to begin fully operational flights to the ISS until 2019. In the event the U.S. commercial crew providers are delayed in demonstrating a fully operational capability to transport humans to space, the risk of de-crewing ISS greatly increases. “The absence of U.S. crewmembers at any point would diminish vehicle operations to an inoperable state,” NASA said in the Presolicitation.

NASA also is considering an option to acquire crew transportation from Boeing for three crewmembers on the Soyuz in 2019, to ensure the availability of back-up transportation capability in the event the U.S. commercial contractor vehicles are delayed or to augment future ISS operations and research.

The Russian Soyuz spacecraft is currently the only vehicle with the operational capability to provide crew services to and from the ISS in 2017 and 2018. There are eight Soyuz launches planned between 2017 and 2018 (four per year). The crew capacity of the Soyuz is limited to a maximum of three crewmembers per vehicle.

Russia recently announced its plans to reduce the Russian crew count onboard ISS from three to two, beginning in 2017. As a result of Russia reducing its crew count by one crewmember, there is now an available Soyuz seat in the 2017-2018 timeframe on each of the two planned spacecraft that would have otherwise had two Russian crew aboard. Of the 24 total Soyuz seats available in 2017-2018, the three seats resulting from the Russian crew decrement are the only available means of transporting additional U.S. crewmembers to ISS during this period.
Posted by Keith Stein at 10:53 PM