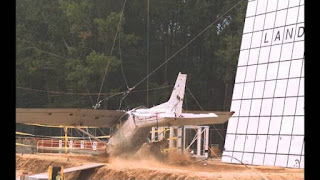 A single engine Cessna 172 plane was dropped to the ground from 100 feet on Wednesday at NASA's Langley Research Center in Hampton, Va., in an effort to help search and rescuers save more lives.

This was the last of three crash tests of three different Cessna 172 aircraft. Each of the three tests simulated different, but common, crash conditions.