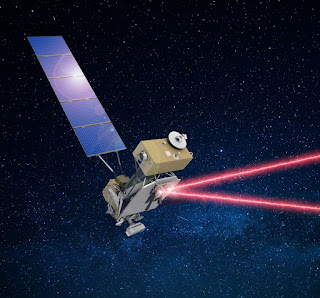 NASA's Laser Communications Relay Demonstration (LCRD) will fly as a payload on STPSat-6, the primary spacecraft of the third Space Test Program (STP-3) mission for the Department of Defense. STP-3 is scheduled to lift off on a United Launch Alliance Atlas V 551 rocket June 23, from Space Launch Complex 41 at Cape Canaveral Space Force Station in Florida.

LCRD represents a significant step toward making operational laser, or optical, communications a reality. The payload's microwave-oven-size optical modules will send and receive data over infrared lasers – not visible to the human eye – at 1.2 gigabits per second from geosynchronous orbit to Earth. At that rate, it's possible to download a two-hour movie in about 20 seconds.

Once LCRD is in orbit and positioned more than 22,000 miles above Earth, engineers will beam data between LCRD and optical ground stations located in Table Mountain, California, and Haleakalā, Hawaii. Experiments will allow engineers to refine the transmission process, study different operational scenarios, and refine tracking systems. LCRD will generate essential data and information to prepare laser communications systems for operational missions, as engineers cannot replicate the same conditions with ground tests.

Later in its mission, LCRD will conduct optical communications relay services with a future terminal on the International Space Station (ISS). The ISS terminal is expected to launch on a commercial resupply services mission in 2022. These operations could prove the viability of using laser communications in future crewed missions to the Moon and Mars.