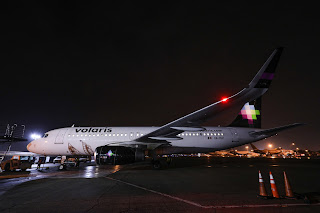 The approximately two-hour flight will operate with A320 equipment outfitted with 179 coach seats.

Announcement of the ONT-MEX services comes on the heels of airlines resuming nonstop flights to Chicago Midway and Houston Intercontinental earlier this month, marking the fourth straight month of flight increases for ONT since the onset of the COVID-19 pandemic.

Ontario International Airport is the fastest growing airport in the United States, according to Global Traveler, a leading publication for frequent fliers. Located in the Inland Empire, ONT is approximately 35 miles east of downtown Los Angeles in the center of Southern California. It is a full-service airport which, before the coronavirus pandemic, offered nonstop commercial jet service to 26 major airports in the U.S., Mexico and Taiwan.
Posted by Keith Stein at 5:45 PM

ONT is an excellent airport--only 20 minutes from our house! And it sure beats the slog, especially during (the pre-covid) rush hour), to LAX.