US spacewalk will work on space station cooling system 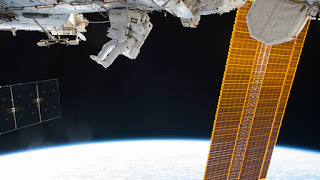 On Sept. 1, two NASA astronauts will spacewalk outside the International Space Station for the second time in less than two weeks.

The six-and-a-half hour spacewalk is scheduled to begin about 8 a.m. EDT.

Working on the port side of the orbiting complex's backbone, or truss, Expedition 48 Commander Jeff Williams and Flight Engineer Kate Rubins of NASA will retract a thermal radiator that is part of the station's cooling system. The radiator is a backup that had been deployed previously as part of an effort to fix an ammonia coolant leak. They'll also tighten struts on a solar array joint, and install the first of several enhanced high-definition television cameras that will be used to monitor activities outside the station, including the comings and goings of visiting cargo and crew vehicles.

This will be the 195th spacewalk in support of space station assembly and maintenance, the fifth of Williams' career and the second for Rubins. As was the case for their first spacewalk together Aug. 19, Williams will be designated as extravehicular crew member 1 (EV1), wearing a spacesuit with a red stripe, while Rubins will be EV2, wearing a suit with no stripes.
Posted by Keith Stein at 7:02 PM