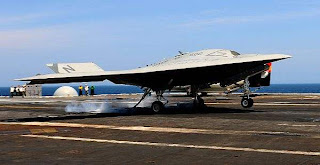 Northrop Grumman Corp. and the U.S. Navy have completed the first arrested landing of the X-47B Unmanned Combat Air System (UCAS) carrier demonstration aircraft on the deck of the USS George H.W. Bush.

The Northrop Grumman-built aircraft landed at 12:23 p.m. EDT while the aircraft carrier was under way off the coast of Virginia, and marks the latest and most significant achievement for the program during carrier sea trials, which began in May.


"Today's historic carrier landing and our operations aboard USS George H.W. Bush show, beyond a shadow of a doubt, that tailless unmanned aircraft can integrate seamlessly and operate safely from an aircraft carrier at sea," said Capt. Jaime Engdahl, Navy UCAS program manager.

The X-47B aircraft took off from Naval Air Station Patuxent River, Md. (Pax River), Wednesday. A mission operator aboard the carrier took control of the aircraft and monitored the flight operations, which included several planned precision approaches in preparation for the first arrested landing.

During today's testing, the X-47B completed the 35 minute journey from Pax River to the carrier and caught the three-wire with the aircraft's tailhook. The arrested landing effectively brought the aircraft from approximately 145 knots to stop in less than 350 feet.

The arrested landings aboard the Bush mark the third major aviation achievement by the UCAS-D program since May. On May 14, the X-47B became the first unmanned aircraft to be catapult launched from a Nimitz class aircraft carrier. On May 17, the aircraft performed the first in a series of precision approaches and touch-and-go landings on a carrier by an unmanned system.