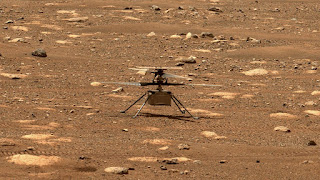 NASA’s Ingenuity Mars Helicopter is two days away from making humanity’s first attempt at powered, controlled flight of an aircraft on another planet. If all proceeds as planned, the four-pound rotorcraft is expected to take off from Mars’ Jezero Crater Sunday at 10:54 p.m. EDT, hovering 10 feet above the surface for up to 30 seconds. Mission control at NASA’s Jet Propulsion Laboratory (JPL) in Pasadena, Calif., expect to receive data from the flight attempt the following morning at around 4:15 a.m. EDT, Monday.

Flying in a controlled manner on Mars is far more difficult than flying on Earth. Even though gravity on Mars is about one-third that of Earth’s, the helicopter must fly with the assistance of an atmosphere whose pressure at the surface is only 1% that of Earth.

Sunday’s flight will be autonomous, with Ingenuity’s guidance, navigation, and control systems doing the piloting. That’s mostly because radio signals will take 15 minutes, 27 seconds to bridge the 173-million-mile gap between Mars and Earth.

Events leading up to the first flight test begin when the Perseverance rover, which serves as a communications base station for Ingenuity, receives that day’s instructions from Earth. Those commands will have traveled from mission controllers at JPL through NASA’s Deep Space Network to a receiving antenna aboard Perseverance. Parked at “Van Zyl Overlook,” some 215 feet away, the rover will transmit the commands to the helicopter about an hour later.

Then, at 10:53 p.m. EDT, Ingenuity will begin undergoing its myriad preflight checks.

“It should take us about six seconds to climb to our maximum height for this first flight,” said JPL’s Håvard Grip, the flight control lead for Ingenuity.

While hovering, the helicopter’s navigation camera and laser altimeter will feed information into the navigation computer to ensure Ingenuity remains not only level, but in the middle of its 33-by-33-foot airfield – a patch of Martian real estate chosen for its flatness and lack of obstructions. Then, the Mars Helicopter will descend and touch back down on the surface of Jezero Crater, sending data back to Earth, via Perseverance, to confirm the flight.

Perseverance is expected to obtain imagery of the flight using its Navcam and Mastcam-Z imagers, with the pictures expected to come down early morning Monday. The helicopter will also document the flight from its perspective, with a color image and several lower-resolution black-and-white navigation pictures possibly being available by the next morning.