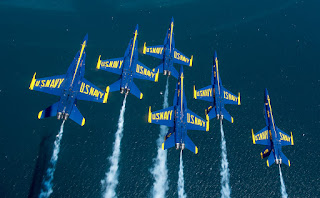 The Naval Air Systems Command at Patuxent River, Md., intends to award a sole source contract to The Boeing Company to install Airframe Change (AFC-483) A1 and A2 kits (Blue Angel modification) to a F/A-18C jet, BUNO 163747. The contract award was announced Friday.

“This aircraft must be delivered no later than 30 June 2020 to support the Blue Angels 2020 show schedule,” the Navy said in contract documents.

In order to install this modification, the required support equipment must be on site by contract award.  Additionally, an 8,000 foot runway must be in place with a flight and ground operations staff to support Functional Check Flights (FCF) after completion of the modification and before aircraft delivery. The government will provide the FCF pilot. The place of performance for this requirement must be within 25 miles of the Cecil Commerce Center in Jacksonville, Fla.

Boeing was awarded the contract to retrofit nine Block 1 F/A-18E Super Hornets and two Block 1 F/A-18F Super Hornets for the Blue Angels team from the current crop of F/A-18C/D fighters, according to an article published in 2018 by the U.S. Naval Institute.
Posted by Keith Stein at 1:52 PM