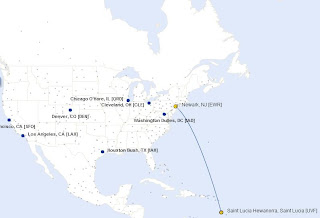 United flight 1642 departs Newark Liberty on Saturdays at 8:55 a.m., arriving at the Hewanorra International Airport in St. Lucia at 1:48 p.m. The return flight, United 1643, departs St. Lucia on Saturdays at 2:38 p.m., arriving in Newark at 7:33 p.m. The service provides convenient connections to and from 22 cities in the United States, including Chicago, Boston and Washington, as well as several Canadian cities.

United Airlines and United Express operate an average of 5,446 flights a day to more than 370 airports across six continents.